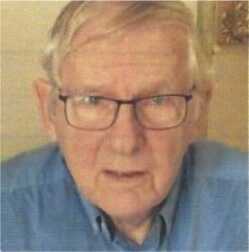 Born Sept. 25, 1932 in Greencastle, he was the son of Andrew “AW” Wallace and Marion Alberta (Bradford) Crandall.

Albert’s father Andrew was a distinguished DePauw history professor and Civil War historian. His mother also worked for the university, first as a secretary to the president and then as the university registrar, and finally as an instructor.

Al spent his childhood and adult life in Greencastle. He received his bachelor’s degree in history from DePauw University in 1956. His studies were interrupted by his service in the United States Army. He served in the Korean War in radio maintenance from January 1953 to June 1954. He received a Korean Service Ribbon, a United Nations Service Medal and a National Defense Service Medal.

Upon graduation with distinction, Al worked in the ISO Insurance Services offices as a fire casualty underwriter for 20 years.

Al met his wife Bertha Louise (Louise) in a book club, learning that she was also a DePauw graduate from the class of 1950. He and Louise were married on May 27, 1972. Both were members of the North United Methodist Church in Indianapolis. Al and Louise have been generous benefactors of DePauw University, the University of Indianapolis, the Christian Theological Seminary and the Christian Church Federation.

Al was preceded in death by his parents and wife Bertha Louise (Woods) Crandall. Al had been a devoted and supportive husband to Louise after a serious stroke left her paralyzed in about 2014. Louise passed in 2018 after 45 years of marriage.

Albert is survived by a brother and sister-in-law, Richard and Catherine Crandall residing in Gainesville, Fla. He is also survived by nephews and nieces on his late wife’s side. His surviving friends include Richard Callaway, Herb Potter and Merri and Peter Olenschuk.

During his last years, Albert received excellent care from Mildred Bibbs and Sharia Dycus of Senior Helpers in Indianapolis and from Traditions at North Willow. During his last days, he had care from Amada Senior Care and Seasons Hospice. His guardian, Mary J. Hoeller, RN, JD, NCG, is blessed to have known him and Louise and to have been their advocates since 2015.

Visitation will be held at 11 a.m. on Friday, Feb. 12, followed by services at noon, at Hopkins-Rector Funeral Home, 4 Percy L. Julian Dr., Greencastle. Interment with military honors will follow at the Forest Hill Cemetery.