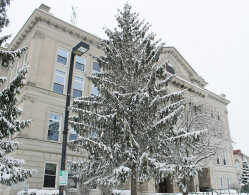 County Attorney Jim Ensley made the announcement to employees with an email Monday evening that the Putnam County Courthouse and other county offices would be closed. Offices in charges of essential or emergency services remained open.

Additionally, the Putnam County Council meeting set for 6:30 p.m. has been canceled.

Mayor Bill Dory informed the Banner Graphic that City Hall is closed Tuesday, with employees working from home. They can be reached by email.

Other city departments will be operating as close to normal as allowed by the snow situation.

The Putnam County Public Library also announced that it would be closed, while the Greencastle Ivy Tech campus is having a virtual learning day.

All four county school corporations and Area 30 Career Center are also physically closed, though most have implemented some sort of eLearning.