Carringtons take the oath to play at Marian 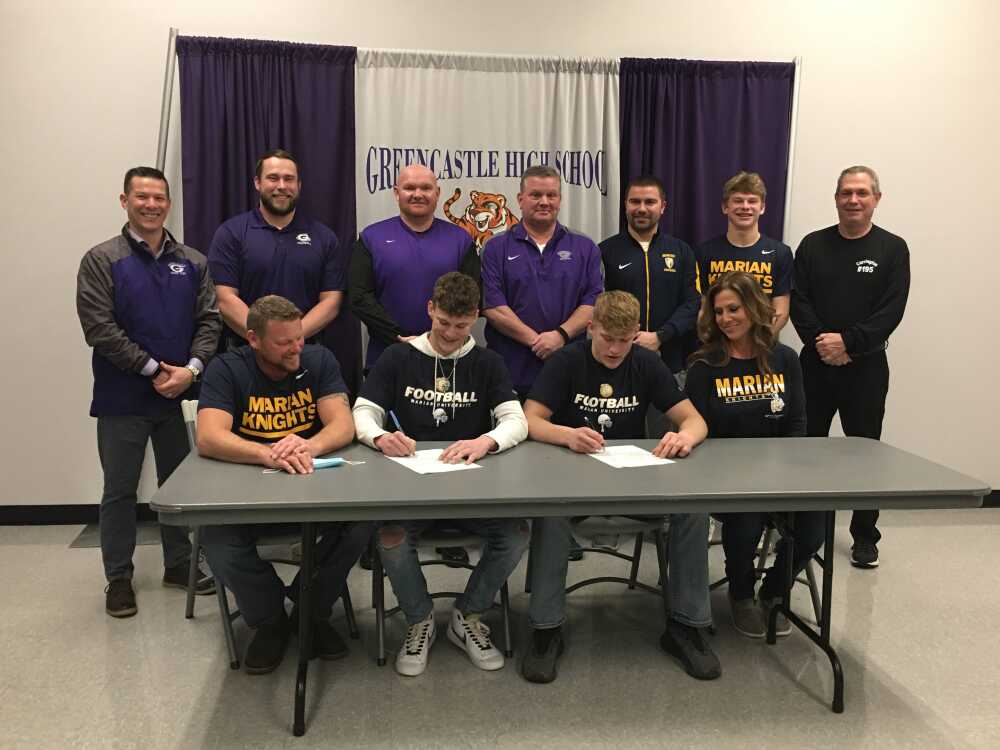 Brach and Logan Carrington finished up a busy weekend by signing on to play football at Marian University Monday night.
Contributed Photo

The conclusion of a whirlwind 72 hours for the Carrington family came Monday night when Brach and Logan Carrington signed on to continue their football playing days at Marian University.

“Our cousin Tyler (Lotz) went there and was a good football player,” Logan Carrington said about the decision. “It seems like it’s an extremely good football program and looks like a place that is going to be fun for us, not just athletically but academically, too.”

“I really like the weight program there and (Marian) looked like the best bet for me to be the best football player I can,” Brach Carrington added. “Coach (Rob) Gibson, who was our coordinator, went there and he liked it a lot.”

The Indianapolis-based campus wasn’t completely accessible to those taking a visit but both Greencastle seniors knew they liked what they saw.

“The campus looked really cool,” Brach Carrington said. “We didn’t go inside of much because of all the COVID things going on but I thought it was a very nice campus.”

“For me, it was a very big step up from high school,” Logan Carrington noted. “Not too big but big enough to let you know you’re in college.

“There’s a lot more people there to let you know you’re in college, there’s a lot of things to do and a lot of area to enjoy things.”

On the education front, both brothers said there were plenty of opportunities to pick the right path into the future as well.

“I’ve narrowed it down to a couple of options but I’m undecided right now,” Logan Carrington added.

Both Carringtons were being looked at to play on the defensive side of the ball and though both were very good wrestlers, both also agreed football had its advantages in the end, though the possibility of hitting the mats was still on the table.

“I feel (football) will be more fun throughout college,” Brach Carrington said. “I won’t be having to worry about my weight all the time and it seemed like the best option but we will have to prove ourselves again.

“We’ve always had to cut weight; now I have to add weight,” Logan Carrington added. “It’ll still be hard work but it will be fun.”

Though there was still a few months of high school to go, both brothers were pleased with their decision and ready to go forward in the fall.

“I’m definitely relieved not to have to worry about it any more,” Brach Carrington said. “I had it done before wrestling; after finishing wrestling, I’m getting a lot more messages about colleges but I’m solidified.

“It’s definitely relief for me,” Logan Carrington added. “I didn’t get offered until late and it was a constant struggle to find a school .

“The day they offered me was definitely a good day.”