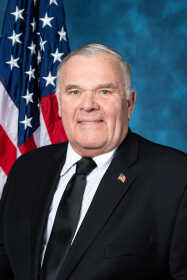 “These gun control bills punish law-abiding Americans rather than focus on criminals breaking the law,” Congressman Baird said. “Studies show most criminals obtain firearms through illicit means like purchasing them on the black market and these bills would do little to prevent firearms from getting into their hands. If we want to decrease gun crime, we need to enforce the laws that are already on the books like prosecuting straw purchasers.”

H.R. 1446 would allow the government to delay a firearm sale from three days to 20 days as a background check is completed. It passed the House Thursday by a 227-203 vote.

First, Baird said, this puts an unnecessary barrier on Americans’ constitutional right to own a firearm. Second, the current National Instant Criminal Background Check System (NICS) has proven to be sufficient. In 2020, NICS processed a record 39.7 million background checks — 10 million more than the previous record. Third, this bill will not close the “Charleston loophole” or would not have prevented the horrific shooting that took place at Emanuel African Methodist Episcopal Church. The shooter was able to purchase a firearm on April 16 — two months prior to the shooting on June 17 — because of errors in filing paperwork and communication between law enforcement agencies.

The background check process requires all commercial firearm purchases to be either approved, denied or delayed for further investigation during the FBI background check. When they are delayed the sale can be held for up to three days. If the FBI does not deny the sale in that time the sale can proceed. However, the FBI does not stop investigating the purchaser if they have failed to make a determination after three days. If the FBI determine the purchaser was a prohibited person after three days, the ATF can be called to retrieve the firearm.

H.R. 8 would require all firearm sales, private and commercial, to be subjected to background checks. Current federal law states that all commercial firearm sales are subject to background checks but private sales between private citizens are exempt. The Constitution does not give the federal government authority to regulate non-commercial, intrastate transfers of legal firearms between private citizen, Baird noted in a press release.