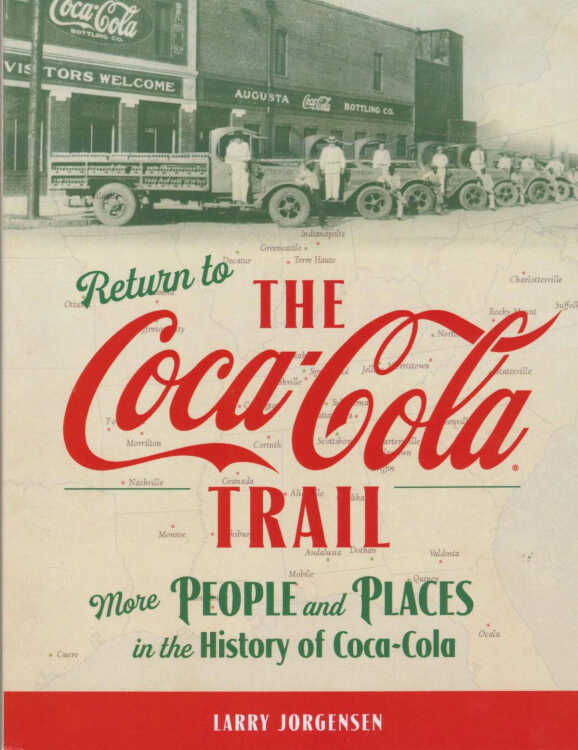 Any dedicated Coke drinker in Putnam County should know the distinctive green color of classic Coca-Cola glass bottles originated in the sands of Fern Cliff outside Greencastle, but a new book by Larry Jorgensen, “Return to the Coca-Cola Trail” tells that story and so many more to a wider audience.
Courtesy photo

Not being much of a pop drinker, I’ve nonetheless had a soft spot in my heart for Coca-Cola over the years.

Partially because as a 14-year-old, my first real job was at Wisconsin Farms, a suburban Chicago delicatessen,where I spent about half my day in the bottle room, sorting glass bottles returned by consumers for two-cent deposits. Bottles from Canada Dry, Pepsi, Dr. Pepper, Hires Root Beer, Orange Crush and of course, Coca-Cola had to be sorted into corresponding cases so that when the drivers for each company delivered new product, they could haul the empties back to be cleaned and refilled.

That’s not a process too many are familiar with in these days of recycling plastic bottles and cans.

While sorting those bottles, the Coke empties were always an attraction what with the names of local bottlers embossed on the bottom of the iconic green glass bottle, a process begun in 1918.

In fact, those city names inspired a game in which participants would see who got the city farthest away, which meant the closer your bottle, the more often you paid for the drinks. If you were buying the classic 6.5-ounces bottles from a machine, that meant a cold, refreshing drink and a geography lesson, all rolled into one.

More than 1,500 cities were embossed on the bottom of Coke bottles, indicating the location of the bottle distribution plant and where bottles were supposed to be circulated, according to new book by Larry Jorgensen, “Return to the Coca-Cola Trail.”

Born in 1886, Coca-Cola has been woven into the fabric of American life, continuing to this day by withstanding the Pepsi Challenge, Cola Wars and the introduction of New Coke.

Knowing that the green color synonymous with the Coca-Cola bottle is owed to the sandstone quarry at Fern Cliff, outside Greencastle, I immediately wondered whether Greencastle would be a part of Jorgensen’s book.

It didn’t take long to find out. Greencastle is featured first on the “Coca-Cola Trail” in the initial chapter titled, “Why is the Bottle Green?”

The color, writes Jorgensen who dedicated the first seven pages of his book to the Greencastle connection, was “the unexpected result of a decision by the Coca-Cola Co.” to establish a distinctive design for its bottle. The soft drink bottling industry was booming in the early 1900s, and with numerous bottlers using similar style bottles, visual confusion was created for the consumer and the industry.”

The Coca-Cola Co. initiated a plan to solve the problem in 1913 with a competition among bottle manufacturers to design an exclusive new Coca-Cola bottle. The Coke people wanted a shape that was instantly recognizable and so distinct it could be picked out by touch in the dark or in pieces shattered on the ground.

The Root Glass Co of Terre Haute won the competition with the now-famous curved bottle design patented in 1915.

Five years earlier Root Glass had purchased a 160-acre sandstone (a main ingredient in glass making) quarry site called Fern Cliff, now a nature preserve near Greencastle. Fern Cliff possessed an abundance of sandstone for glass making, and early Coca-Cola bottles were made from that sand. The stone was crushed, washed with water from the nearby Snake Creek, and loaded into rail cars to be transported to the Terre Haute plant, Jorgensen advised, noting that a New York Central spur line served the quarry operation.

The unique mixture of copper and other minerals in that sand created the green tinge in the first Root bottles. Coca-Cola was so pleased with the result it specified in future production contracts that the bottles include the color tint which was originally called “German green” but later re-identified as “Georgia green” to honor Coca-Cola’s home state.

The Root glassworks was sold in 1932 to the Owens-Illinois Glass Co. Operations continued at Fern Cliff for another four years, until a new more pure source of glass sand was located. 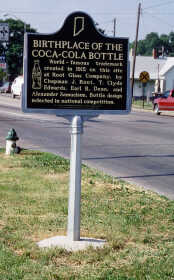 “There is a big gap in the Coca-Cola history from 1945 until they closed in Greencastle,” Jorgensen said, explaining that he talked with multiple people locally and did research at numerous sites, including the Putnam County Museum and Putnam County Public Library.

“The most famous person in Indiana Coca-Cola history, James Yuncker, was involved somehow in the Greencastle plant,” Jorgensen added. “I could not find more details. Yuncker started with the Indianapolis plant, and it appears had some involvement in as many as 18 plants. A descendant of the family currently has the plant in Kokomo.”

Coca-Cola was first bottled in Greencastle in 1914 by Otis and Charles Gardner, Jorgensen notes. Records show that the first year they used 656 gallons of syrup, which should have produced more than 4,000 cases of 6-1⁄2 ounce bottles.

When the Gardner brothers, who started out with an ice business in 1905, purchased the Greencastle Coca-Cola franchise, they incorporated under the name Coca-Cola Bottling Co. Inc. The new venture must have impressed the local business community, Jorgensen sensed, because Perry Rush, who had been vice president of a local bank for 22 years, resigned to join the Gardners. He became vice president of Coca-Cola Bottling, while Otis Gardner was president.

Residents of the Greencastle area also responded favorably to the new beverage, and on New Year’s Day 1929 the Gardners reported things did indeed go better with Coke, boasting that sales the preceding year were “enough to supply 37 bottles of Coca-Cola to every man, woman and child in Putnam County.”

Jorgensen details that during wartime in 1945, Gardner ran a newspaper ad with the heading “refuses sugar substitutes,” explaining that there would be an “equitable system” for rationing Coca-Cola in Greencastle, beginning that July 1. “We will not compromise the integrity of Coca-Cola with sweetening substitutes,” the ad explained.

The war certainly did not slow the Gardner brothers‘ enthusiasm for the Coca-Cola business, Jorgensen reported, because in 1945 they announced plans to build a new bottling plant on North Jackson Street. That building remained after the bottling business was sold, being purchased in 1991 by A. A. Huber and Sons for its heating and air-conditioning business.

In closing his book’s first chapter, Jorgensen notes, “It is interesting to note Greencastle actually was home to two bottling plants for a brief period in the early 1900s.”

The growing popularity of the new bottled soda business apparently attracted the interest of George W. Bence, a local doctor and businessman. In 1909 he opened the PleZee Co., blatantly boasting about the quality of his beverage with the slogan “PleZee, Best Soft Drink on Earth.”

To create attention and creditability for the “best on earth” claim, Jorgensen said, the company conducted a taste test on a Monon Railroad excursion trip to Michigan City. Great shades of the Pepsi Challenge. After the event, PleZee proudly announced the sale of eight cases of soda during the trip.

“One of many entrepreneurs throughout the country who tried to copy a successful idea,” Jorgensen wrote, “but couldn’t match the competition of the light green bottle from Greencastle.”