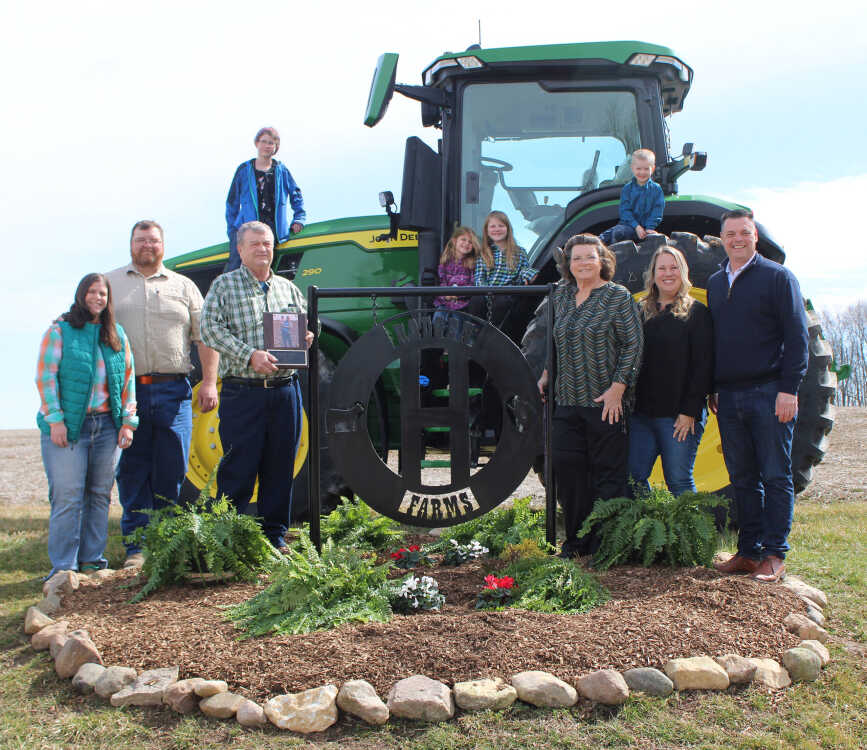 Officially, the plaque says that Abe Hodgen was the winner of the 2020 Hall of Fame Family Farm award.

In practice, there’s a lot more to it than that. Why else would the family picture following the award have been taken in front of wife Shirley’s tractor?

Or why would a total of eight family members have been present when the award was presented recently at Abe and Shirley’s home near Roachdale?

After Ag Day Committee members Ken Carrington, Heather Poynter and Jenna Nees showed up at the house for an afternoon visit, Abe commented that, while the award was a surprise to him and Shirley, he also knew something was up when son Robert and his family showed up from New York.

So it is that the 2020 Farmer of the Year Award went to Abe Hodgen ... and Shirley Hodgen ... as well as Paul, Robert, Jennie, Kari, Katie, Karlee, Sidney and Ryan Hodgen.

Starting out, though, more than 48 years ago, Shirley may not have seemed like the most likely farm wife. A city girl from Hammond, Shirley was in an animal science class at Purdue, but Abe noted that she looked a bit out of place next to her classmates.

“The first time I every laid my eyes on Shirley, she was in Animal Science 301, which was junior level livestock judging, and I was on the livestock judging team,” Abe recalled. “The rest of the kids in her class were trying to place the pigs. And six months later she said, ‘They were trying to place them and I didn’t know that pigs actually had hair on them,’ so that’s what she was looking at.”

At this, the room erupted with laughter.

“I thought they were all like Porky Pig,” Shirley offered. “I dabble in art, and I had boar bristle brushes and I’m standing there thinking, ‘Is that where my boar bristle brush comes from? That guy’s got hair!’”

Accompanying Abe to the family farm, Shirley was similarly confused.

“I would ask Abe, ‘Why is this field not being planted?’” she recalled. “And he said, ‘It is. Those are soybeans,’ because back in the ’70s we didn’t have the weed control that we have today. I had to learn what soybeans are. I couldn’t tell one black cow from another. I’ve had a great learning experience.”

Shirley has gone from those inauspicious beginnings to being the point person on getting soybeans planted.

“There were five or six years I never planted any beans,” Abe said. “She planted all the beans.”

“That is actually my tractor out there. That is my new tractor this year,” Shirley said of the shiny, new John Deere parked next to the Hodgen Farms sign next to State Road 236.

Of course, Abe had his own growing pains as well. He recalls, as a 10-year-old growing up on the family farm in Montgomery County, driving a cultivator to another of the family’s farms more than 20 miles away, where he “did one of the worst jobs cultivating anyone has ever seen” because he was driving 20 miles per hour in the field.

Whatever their early struggles with some of the finer points of agriculture, Abe and Shirley learned fast, and 1973 was quite a year for them. They had their first date on Valentine’s Day that year, Abe graduated from Purdue, they got married on Aug. 4 and they harvested what Abe considers to be his first crop.

Within a few years, they found themselves spread especially thin, with the family buying a farm in Mississippi in 1977 and farming in both states until 1984, when they sold the southern operation to focus on expanding in Indiana.

“We got out of Mississippi and back here, she told me as long as I just stayed in Indiana and adjoining states she would never say a word to me,” Abe recalled.

It was probably a good time to do so, as Abe considers simply surviving the ’80s to be one of his farming accomplishments.

“One thing I figured out about the mid-’80s: No matter what, never get on the wrong side of what the U.S. government is doing,” he said. “That’s the bottom line.”

He recounted how when he started out a decade or so earlier, farmers were saying things like, “the government was never going to tell them what to do. They had no business being in it. They didn’t need the government.”

Then came 1985 and “things were really changing and going downhill,” Abe said one farmer who had been particularly vocal about not wanting government intervention was suddenly applying for federal loan deficiency payments, which allow producers to delay the sale of a commodity until more favorable market conditions emerge. 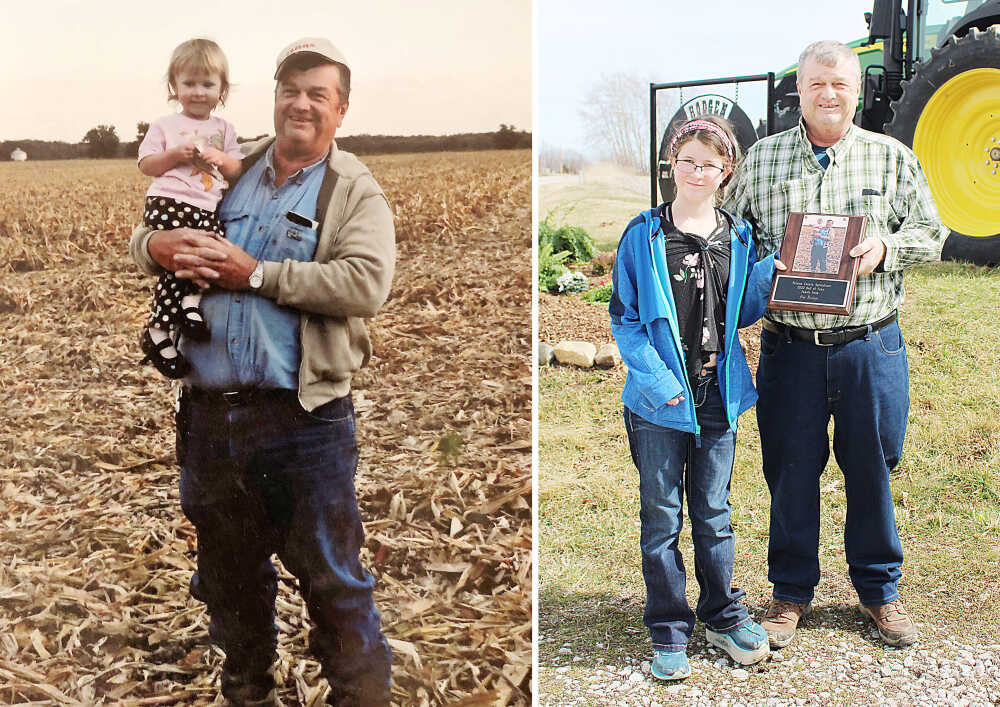 Celebrating Grandpa’s honor at receiving the 2020 Putnam County Hall of Fame Family Farm award, Abe and Katie Hodgen do their best to recreate the photo featured on the plaque, just a few years later.
Courtesy photo and Banner Graphic/JARED JERNAGAN

Hodgen Farms has also continued to grow, despite nearby Big Raccoon Creek often flooding out some of their land.

“We’ve grown steadily through they years,” Shirley said. “Been through the drought of ’12 and a lot of floods. A lot of people, when they see the bottoms flood in the spring, they think, ‘Who’s that farmer that just got his crop wiped out?’ That’s me. “We’ve done really well.”

Going hand in hand with growth has been advancing technology.

Though Abe considers himself “a half generation too old” to be very good with technology, the family has manged to keep up.

“When we first started farming,” Shirley said, “we had markers and most of the rows were kind of crooked. Now you literally have iPhones and iPads that, you push a button and it’ll drive it straight. You get to the end, you turn it around and push the button again and it’ll drive it within one or two inches of the last pass.”

Now, with GPS tracking and electronic devices, not only are rows straighter, but seed is saved, as are chemicals, particularly on fields of irregular shape.

“The technology has really amazed me of how far we’ve come because we are as technical as an airplane, if not more,” Shirley said.

Abe interjected that the technology of flying is still probably more advanced, but he also has a large, advanced machine at his fingertips.

Perhaps more than anything, both Abe and Shirley are happy to have raised their sons on a farm.

“I consider that my boys were truly placed in a unique opportunity,” Abe said, though he gives Shirley most of that credit. “When the boys were small, I was working all the time, come home dead tired, went to sleep and didn’t know a whole lot. Then when we got to grandkids, I wasn’t working that hard and I saw everything that is kind of involved in raising kids that I had no clue.”

Regardless, a farm was a good place to raise children, as they got to learn by trial and error.

“I am very fortunate our boys are good people and successful,” Abe said. “I purposely allowed them to do a lot of things on their own. If it worked, it did, and if it didn’t, it didn’t, but they both learned really great.”

“They learned from their mistakes,” Shirley said. “And I will say, living in the country allows the kids to be in 4-H, to take care of livestock and do things on the farm.”

It also teaches them priorities, she said, because as important as 4-H or FFA or sports might be, on a farm they know that job No. 1 is getting the crops planted and harvested. Still, the other activities had their own lessons.

“Life’s not fair,” Abe said, “but the overall thing is, if you work long enough and hard enough, you might get rewarded and that’s what they got out of the 4-H and FFA programs.

“No, we didn’t win everything,” Shirley added, “but when they did win they appreciated it and they knew that it was their hard work that got it done.”

Now they hope the next generation of Hodgen children is learning the same lesson, as the grandkids now have llamas, goats and a horse in 4-H.

On a farm, though, it’s not just the kids who are learning.

“I’ve had a real education on the farm and it’s been wonderful raising these guys,” Shirley said of the two boys. “They both stayed in agriculture one way or another. We’ve had a good life.”

And winning this award is another piece of that good life.

“It is kind of special to get an award that comes from your peers,” Abe said.