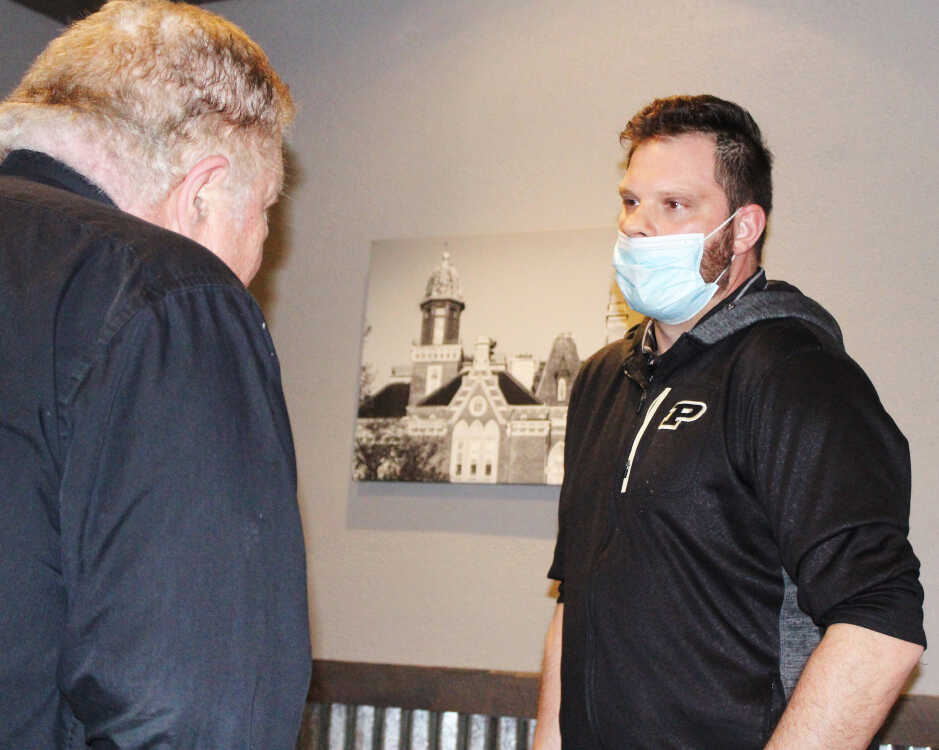 Jordan Vaughn (right) chats with Darrell Wiatt after his presentation to the local Daughters of the American Revolution on how an 1840s Belle Union cabin ended up at Robe-Ann Park.
Banner Graphic/ERIC BERNSEE

Ever wonder how the historic log cabin at the main entrance to Greencastle’s Robe-Ann Park came to be located there?

It didn’t just sprout out of the ground there alongside U.S. 231. It was moved there in 1937 from near Belle Union in Jefferson Township.

Jordan Vaughn, who lives at Belle Union just across a field from where the historic cabin once stood, gave the Washburn Chapter, Daughters of the American Revolution (DAR), a local history lesson Tuesday night. 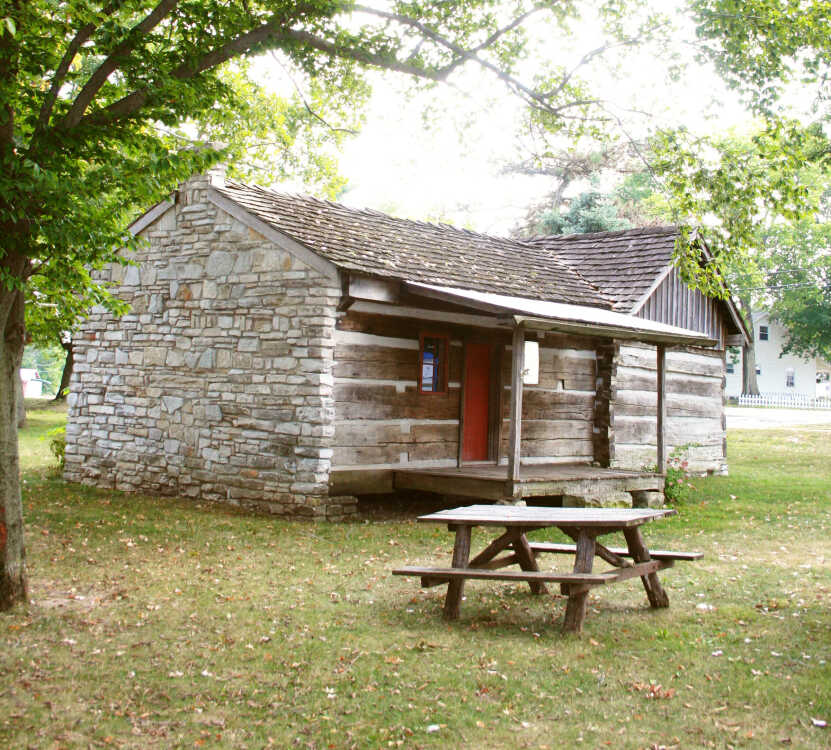 DAR Cabin sits at the entrance to Robe-Ann Park in Greencastle. The biggest section on the east side of the cabin is constituted from the historic Belle Union cabin.
Banner Graphic/ERIC BERNSEE

The Belle Union cabin, which was originally located between the towns of Belle Union and Mt. Meridian, was built around 1840 by Rev. Joel Vermillion on land purchased from Randolph Lanham, Vaughn related.

“Based on a story told by Joel and Martha Vermillion’s granddaughter, Bertha Runyan Fry of Putnamville, there was a prior, smaller cabin before Joel rebuilt or added on to make a larger structure at the original site for his growing family,” he noted.

The cabin was a two-story structure consisting of four rooms with four fireplaces in the main part and another in the kitchen. The kitchen connected to an open porch that was used as a dining area when weather permitted. Ceilings were made of yellow poplar.

According to a statement by Mrs. Frank Vaughn, “The old house was truly a social center for many pioneer families of its day” when it stood at its original site.

Located in section 10 of Jefferson Township in Putnam County, the homestead currently shows no indication a cabin once stood there, other than an old well, Vaughn said. The road on which it sat had been discontinued years ago and is now known as “the old lane” and serves as a property border

“The cabin sat right where the road went east and west and north and south,” Vaughn described.

Rev. Vermillion and his wife Martha raised 11 children at the cabin. Their son, Thomas Shaw Vermillion, took over the property and cabin sometime after his parents relocated.

He ended up selling the land and cabin to a neighbor, Strother Pitt Vaughan (note the different spelling) and his wife, Nancy Ann Bowen (Jordan Vaughn’s third great-grandparents), in the 1880s.

It was on that homestead that it was acknowledged in 1895 that Strother and Nancy Vaughan “grew the best plums that the area had seen some time.” As evidence, Strother brought in a branch about 2.5 feet long, which was full of plums as a vine of grapes. The type of plum was the variety known as “shippers prize,” Vaughn said.

After Strother and Nancy Vaughan retired to Coatesville by 1908, they left the land and cabin to their six sons. Frank, who was raised in the cabin, took ownership of the property, residing a quarter-mile east of it. Eventually, in honor of his parents, he donated the abandoned structure to the local DAR and it was dismantled and moved to Robe-Ann Park.

Groundbreaking ceremonies for the reproduction took place in November 1937. Dedication occurred Sept. 17, 1938 with Ruth Grimes as the speaker.

With deteriorating material, a second story for the cabin at the park could not be reproduced. Besides another donated Roachdale cabin, material taken from a third cabin was needed to finish the structure in its reproduction. Alfred Grimes donated material from a structure originally built by Stephen Paris on the National Road near the now-vanished town of Westland in eastern Warren Township.

The single room was originally intended to hold chapter meetings and to preserve furniture and other articles of use in pioneer days for educational purposes.

The biggest section on the east side of the cabin at the park is the remains of the Belle Union cabin. The cabin is noted as having”especially fine timber that would be difficult to duplicate today.”