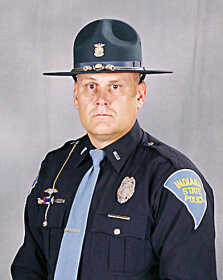 Cox was first assigned to the Indianapolis State Police Post where he worked road patrol duties for one year, but then transferred to his home district of Putnamville, where he patrolled Hendricks County for nearly 15 years.

In 2005, Cox was promoted to sergeant to serve as a squad leader for the Putnamville District. In 2010, due to a district realignment, Cox was transferred to the Indianapolis District and served as a supervisor for a group of troopers assigned to the west side of Indianapolis and Hendricks County.

During his career with the state police, Cox served for nearly 13 years on the emergency response team and is a recipient of two Combat Action Awards.

Cox has replaced Lt. Dan Jones, who was the District Commander of the Putnamville Post from 2008 to 2021.

Cox stated to the Putnamville troopers that, “I look forward to working for you, and with you, at Putnamville."

Cox currently resides in Hendricks County with his wife and has three sons. His son David Cox Jr. is also a member of the Indiana State Police.