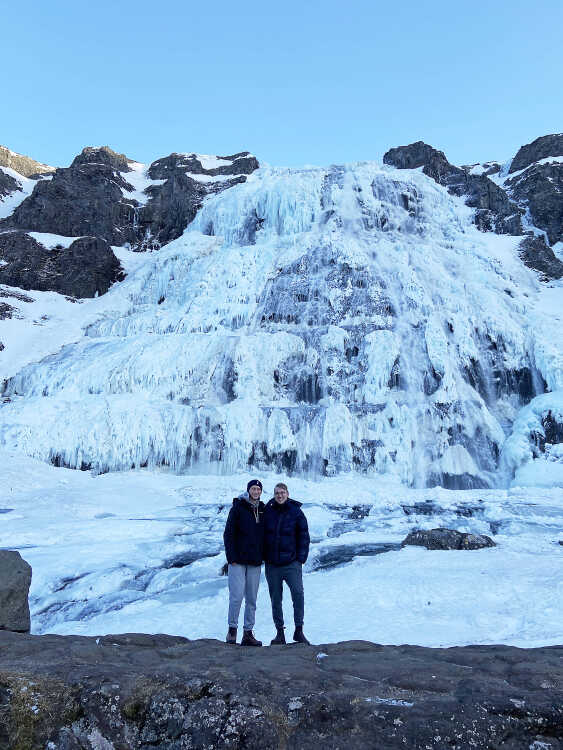 As streams of lava surprise a different corner of the country, Greencastle native Leo Weeks (left) visits a different sort of stream in northwestern Iceland with host brother Bjarni recently. The waterfall behind them is one of the largest in the Westfjords region of Iceland.
Courtesy photo

ISAFJORDOR, Iceland — While the recent eruption of a long dormant Icelandic volcano made for some interesting visuals in news reports, most in Putnam County have no direct link to the North Atlantic island nation.

However, Leo Weeks, a 2018 Greencastle High School graduate, has been studying in Iceland this semester.

And while, depending on your perspective, finding oneself near a volcanic eruption could be a sign of good fortune or misfortune, Weeks actually found himself nowhere near the eruption this weekend.

The Wooster College junior is actually studying in the small town of Isafjordur, which is in the Westfjords, or the extreme northwest of the country, far from the capital of Reykjavik and from Fagradals Mountain.

He was, however, in the area three weeks ago when he first arrived in Iceland.

“The day before my study abroad program drove from our quarantine facility — which was in Keflavik, about an hour or so from the capital — the volcano was beginning to show signs of an eruption,” Weeks told the Banner Graphic.

Those signs came to fruition on Friday evening when the volcano roared to life.

While Iceland is known for its volcanic activity, this was the first eruption on the Reykjanes Peninsula in nearly 800 years, according to the Associated Press.

Furthermore, this particular volcano had been dormant for 6,000 years.

Regardless of any of it, Weeks seems to be enjoying his time abroad.

“We had our program leaders inform us of the risk and whether or not it would impact anything as we traveled from one end of the country to another,” Weeks said.