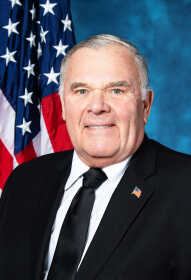 “As our country faces a crisis along our southern border, a crisis that President Biden has created, it is unthinkable that Congress would grant amnesty and encourage millions of more migrants to illegally enter the country,” Baird said. “President Biden and Congress should work together to resolve the crisis at the border by first securing our border. After the border is secured, and only after, can Congress then begin debate on comprehensive immigration reform.”

More concerning, the congressman said, is the Customs and Border Protection agency informing Congress that four people, whose names are listed on the FBI’s Terrorist Screening Database, were apprehended while trying to cross the border.

The House of Representatives passing H.R. 6 will only exacerbate this crisis, Baird said, and signal to others that it is okay to illegally cross our nation’s borders.

Baird said the bill would do the following:

-- Grant green cards and amnesty on a mandatory basis to more illegal immigrants that were originally established under the Deferred Action for Childhood Arrivals program.

-- Grant green card status to those who entered the country illegally.

-- Applicants with multiple misdemeanor convictions, even if the crime was violent or resulted in death or bodily injury to receive a green card

-- Block consideration of serious, violent crimes committed as a juvenile when adjudicating an application.

-- Gang member exclusion is very onerous – only the DHS Secretary can provisionally deny an applicant based on gang membership, and the denial is subject to an appeals process.

-- Include an expansive waiver of the criminal exclusions.

-- Allow individuals deported under the Trump Administration to apply for green cards by eliminating the physical presence requirement.