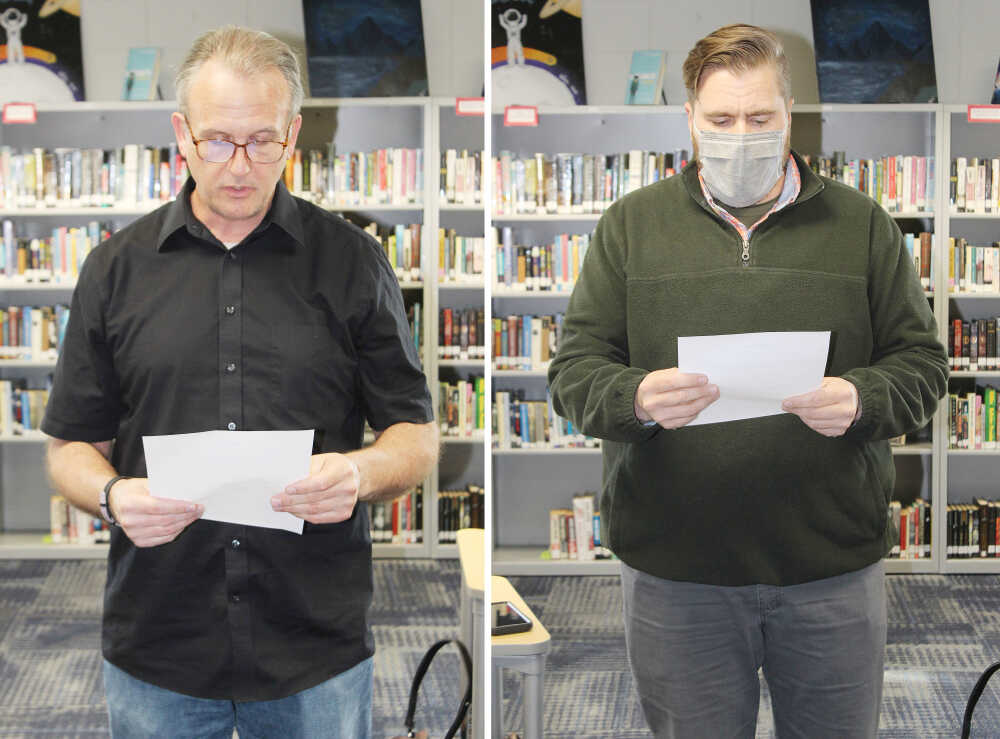 After being a broken board since Anthony Heavin and Craig Newby resigned four weeks ago, as well as facing criticism from parents and teachers, the South Putnam School Board is now whole.

Last Friday, the board interviewed six candidates for the two positions, all of whom came from either Warren or Jefferson Township.

Hinchman has been a self-employed IT consultant for the past 21 years, having gone across the world prior to raising a family. He said he was a “new” Putnam County resident having been here eight years and does not have children at South Putnam.

“The reality is that children are eager to be educated,” he said about what he learned from his children. “If you don’t feed them, they will starve. What I feel with my children and others as well is if you don’t give them something to work for, they’re just going to withdraw into themselves or in the technology that’s given them.”

Hinchman said he believed that South Putnam has a more traditional and grounded approach compared to other area school systems. He wants to see that the corporation “stays level” while allowing students to grow.

“I do have the ability to clearly look at problems logically and try to work through them without the emotion,” he said about what he could bring to the board. “I like to believe that I can be a good leader when need be, but that doesn’t mean that I’m a tyrant.

“As a parent, the board’s responsibility not only is to do for the community, but to listen to the community, “ he added. “It may not be in my best interest to go the direction the community wants to go, but as long as it suits the main goal of this organization, which is to educate kids, then I would support it.”

Hinchman said he considered himself a free-thinker, in that he can think outside the box. He exemplified this with his job, in which problems have to be solved quickly. As a parent, he said it was important to be one step ahead of kids.

Hinchman said he would have the time to commit to being on the board. He added that he foresaw no issue with participating in professional development.

“I think (being) efficient and effective come to mind,” Hinchman said about the board setting priorities. “I’m not a real big fan of hem-hawing around. Let’s focus in on what needs to get done, let’s check those off, make sure we’ve thought through them and move on to the next one.”

He said that while he does not always like everything that happens, he finds a way to work around or with them. To him, there would be no reason to quit unless a decision is “so egregious” and “goes against the absolute backbone” of who he is as a person.

Hinchman gave South Putnam’s state ranking as a challenge, but said too that the corporation has a lot to offer. The question, he provided, then becomes how to get parents more involved in the educational process. This can discourage other options including online and home schooling.

Hinchman said the key was increasing the performance of students. This could be done through improving the curriculum overall and not teaching to a test. He went back to the board encouraging parents to get involved for this to happen.

Gregg Hinchman (left) and Joseph Roach discuss their qualifications and what they can bring to the South Putnam School Board during interviews Friday evening. They were announced as the board’s newest members Monday evening.
Banner Graphic/BRAND SELVIA

Roach, a resident of Jefferson Township, said his family has been active in the community, and that he has many relations to South Putnam. However, he realized he wanted to serve the school community, and went for the school board with encouragement from friends and family.

“I will say that I do have a problem, and that is I don’t say ‘No,’” Roach said about committing time to serving on the board. “This is something I can definitely dedicate my time to.”

When it comes to setting priorities for the board, Roach believed it was important to listen to administrators. He said it was his understanding that the board sets provisions and goals, and that the primary point was communication and listening.

“Listening to what people’s concerns are, what the teachers’ concerns are, listening to those situations and trying to decide what is priority,” Roach said. “If you’re talking, you can’t be listening at the same time. That’s the No. 1 thing I think, in terms what I think we need to give our attention to.”

Roach said he would be “comfortable” with the majority when it comes to making decisions. To him, the board was more important than the individual, and that things cannot be taken personally.

Roach saw trust between the board and administration, faculty and the community at large as the greatest issue moving forward. He provided that he had experience in managing culture change through compromise and communication.

In setting a path for education throughout the school corporation, Roach said this was not about his vision, but about the board’s vision. However, that vision has to account for the needs of not just employees, but those of the community.

“My vision is to preserve some nostalgia and some good points of the culture, and mend whatever is needed,” Roach said. “I would say that the biggest thing is to keep attendance high. The more students you having coming to the school, the more diverse that school’s going to be.

“When the school numbers are larger, it seems to me you get a lot of diversity in the students, and you have a lot of opportunities for different types of programs,” he added. “When you have more interest in a broad array of things, that makes more opportunities for more kids, and that becomes more attractive.”

The other candidates which the board considered included Cassie McDaniel, Tammy Brothers, Kristin Rogers and Clay Henry.

Hinchman and Roach both took their oaths of office at Monday’s meeting. They will join Hutcheson, Hacker and Cooper for the board’s regular meeting this Wednesday at 7 p.m. in the South Putnam MS/HS gymnasium.

Correction: This article initially stated that the board's regular meeting Wednesday would be held in the South Putnam HS/MS Learning Center.