More Wayfinding signs set to go up in community 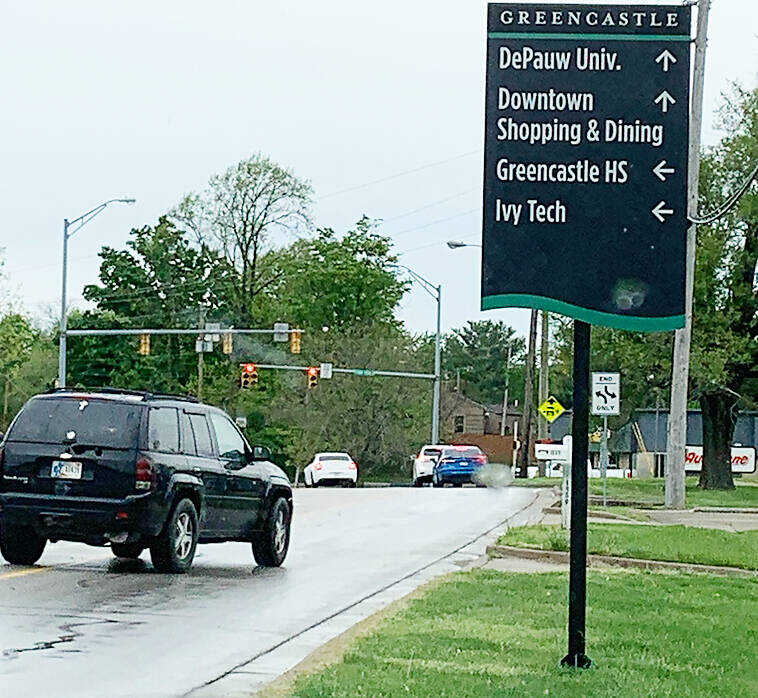 Finding your way around Greencastle -- especially for visitors and new residents -- should be easier in weeks to come with the second stage of the wayfinding project at hand.

Small entry signs are planned, such as at South Jackson Street, at seven various locations around the perimeter of the community.

“Not every entry will have a sign,” Mayor Bill Dory noted. “We tried to pick the roads that had the most traffic.”

If necessary, he added, other signs can be added at a future date.

Installed by Universal Sign Systems, which has done wayfinding in other central Indiana communities, the signs are designed to highlight places like parks, trails, tourist destinations, etc. while conforming to the Uniform Manual on Traffic Control Devices.

Fabrication and installation are being paid for by the city using funds provided by the Greencastle Redevelopment Commission and the use of EDIT funds. Total price is $117,701.

In a special meeting last week, the Greencastle Board of Public Works and Safety ratified an agreement with the Indiana Department of Transportation (INDOT) on the wayfinding signs to be installed along State Road 240 and U.S. 231.

The new wayfinding designations along 240 and 231 will see 33 signs in all. The mayor noted that INDOT only allows three destinations per sign so some intersections have two signs.

“During our work with INDOT, they offered some good suggestions for our consideration,” Mayor Dory told the Banner Graphic. “We did go ahead and add some signs based on their suggestions. INDOT did provide a good deal of technical assistance and feedback. “

Meanwhile, the downtown parking lots will feature one sign at each entrance.

Work on the new signs is expected to start this week with all the locates having been done, the mayor said.

Greencastle is one of three to five communities in INDOT’s Crawfordsville District that have implemented a wayfinding system.

The next phase of the wayfinding effort will be the three gateway signs, the mayor said.

“We are working on easements as INDOT would prefer the locations to be outside of the right of way,” he added.

Along city streets, 31 signs have been installed since early February.

Two or three city signs remain to be installed.

One of those will have to be replaced already, thanks to an accident out on Indianapolis Road.

“Someone ran into it,” Mayor Dory explained. “It will get replaced. Fortunately nobody was hurt.”