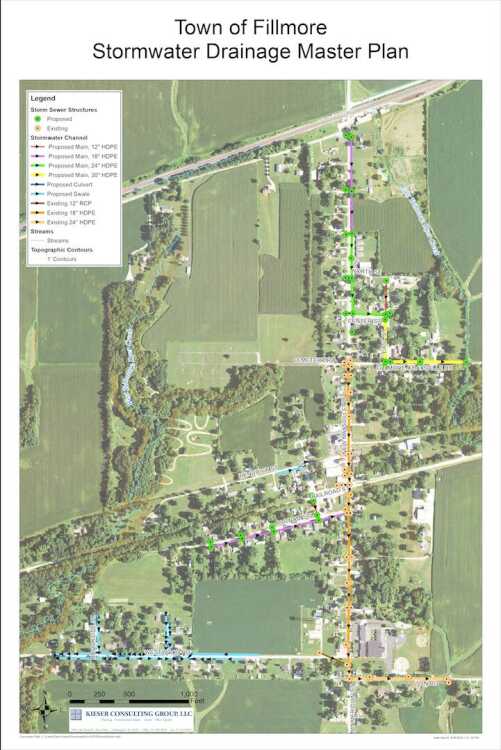 This map shows the existing water mains in Fillmore as well as the proposed stormwater channels planned for the town’s north side. The focus of a stormwater project is the green area.
Courtesy Kieser Consulting Group

FILLMORE — Envisioned as turning a battleship around in a small pond, water improvements in Fillmore recently took a major step. There is more of a sense of optimism with the waiting game.

The culmination of more than two years of planning and considering the most pressing needs, the Fillmore Town Council held its final public hearing on a comprehensive master utility plan at its regular meeting Thursday evening.

Dave Kieser of Kieser Consulting Group gave an overview of a drainage project to address pooling and flooding on the north side of the town. As such, it has been advocated that there is a need for new piping and ditches.

Meanwhile, grant administrator Kristy Jerrell focused on a funding opportunity through the state that could greatly reduce, if not completely cover, the town’s financial burden for the project.

At a determined cost of $1,350,125, the scope of the project would be the town’s corporate limits and looks to benefit approximately 533 residents with 230 utility customers. The time for when it would be under way is slated for spring 2023.

The town was awarded a Community Development Block Grant through the U.S. Department of Housing and Urban Development for a master utility study. With a cost of $55,500 and a 90-10 local match, the town contributed $5,500.

The plan was reviewed and approved by the Indiana Office of Community and Rural Affairs in June.

Other improvements which have been discussed include updating the town’s lift stations and purchasing an automated reading system for its water meters. However, both upgrades are, as of yet, financially unfeasible.

In a major non-water improvement, the town recently repaved Putnam Street. Kieser also said Fillmore could expect its new street lighting soon, a project which will be facilitated with a Rural Business Development Grant through the U.S. Department of Agriculture.

“We want (the improvements) to be cost-effective,” Kieser said. “Raising water and sewer bills is what I would not like to do.”

Jerrell spoke on funding through Indiana’s State Water Infrastructure Fund (SWIF), from which $100 million will be administered in two rounds for water improvements. User rates and median household income are taken into account, but specific grants are determined by the state.

Jerrell not only provided that Fillmore’s chances for SWIF funding were “big.” She went further that it was “a once-in-a-lifetime opportunity” for a SWIF grant to potentially cover the $1.35 million stormwater improvements.

With the first round being closed recently, Jerrell said the state’s expectations for SWIF applications could be gauged when the 2021 grantees are announced. The town would submit an application for the second round in July 2022 and find out the following August.

Jerrell finally noted that the town is “steps ahead” by having a preliminary engineering report (PER) of the improvements. She added that she would reach out to the Putnam County Community Foundation about possible fund-matching opportunities.

• The council conducted its first reading of Ordinance 2021-3, which sets out special circumstances allowing no or reduced billing for water and wastewater. These include property owners who may be “snowbirds” or doing renovations.