Hot enough for you? Just wait 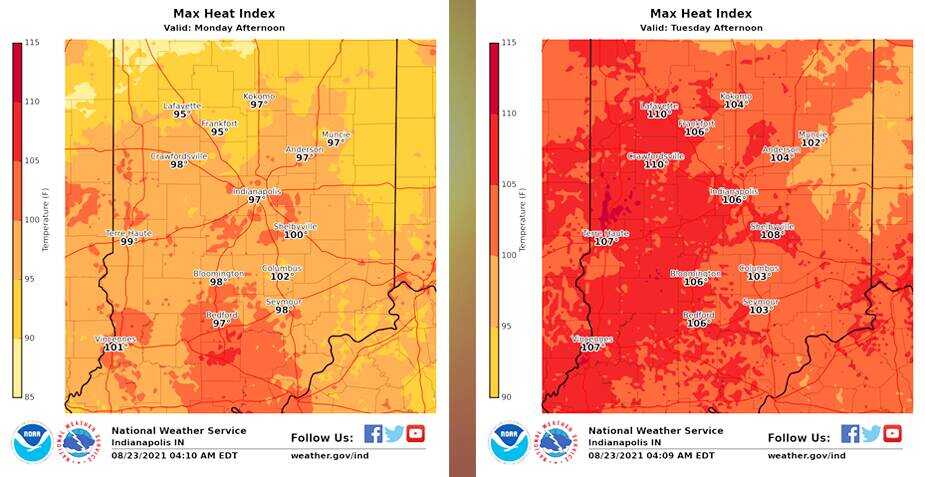 With three straight days of 90-degree or better temperatures already in the can, west-central Indiana will remain on a hot streak at least until Saturday, the National Weather Service office at Indianapolis reports.

After hitting 90 on Saturday, 93 on Sunday and 92 on Monday, it looks like nothing but the 90s for the next five days, extending the longest stretch of 90-degree days this summer to at least eight days.

While it’s hot and can be dangerous -- Tuesday is expected to produce a 110-degree heat index for Greencastle and the Putnam County area -- what we’re experiencing is nowhere near a record performance.

On average, central Indiana endures 20 days of 90-degree temperatures each summer, usually seven in July and six in August. There have been a dozen 90-degree days overall in 2021, including the additional August period of Aug. 10-12.

By contrast, the average August high temperature is 84.3 degrees and the month usually sees 3.2 inches of rain.

That’s the other extreme in 2021. Thus far, central Indiana has seen only about a quarter-inch of rain with 0.36 inches of August rainfall reported at the Indianapolis airport.

Peak afternoon heat index values for Tuesday through Thursday will be as high as 100 to 105 degrees across much of central Indiana, the Weather Service notes. This can cause heat illness with prolonged exposure. Heat illness can overtake you quickly.

Take steps to limit your time outside during the heat of the day this week. Dress in light-colored clothing, drink plenty of water and do not forget to check on those especially vulnerable to heat illness, including young children, the elderly, and those with chronic medical conditions, or those without access to air conditioning.

Finally, keep a close watch on pets and ensure they have access to plenty of water and a cool area.