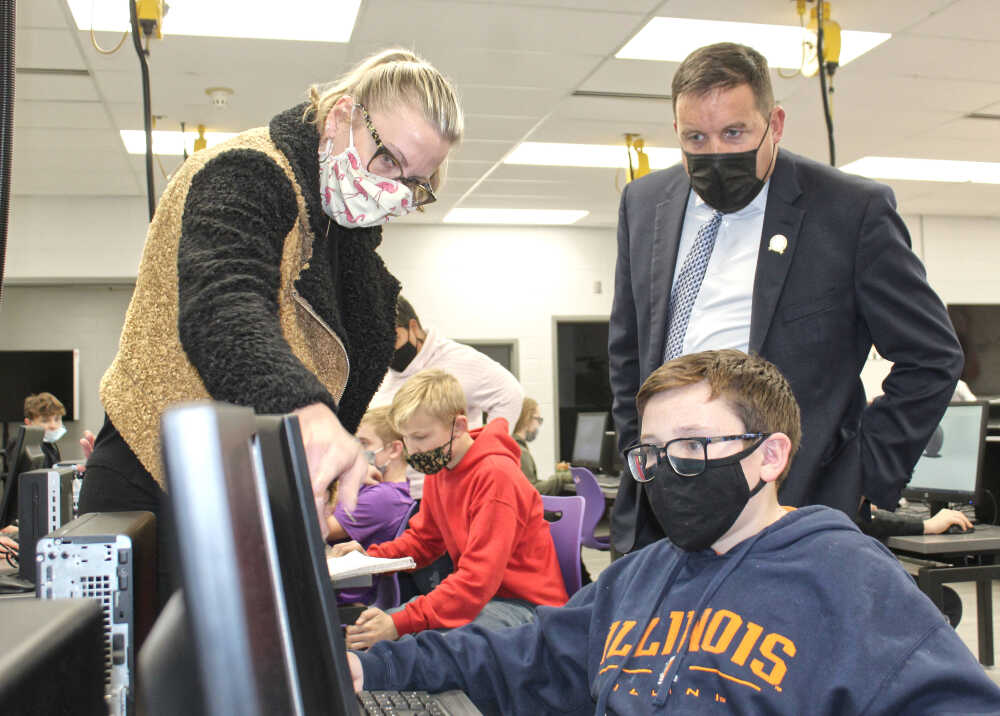 Visiting on an invitation to discuss a focus on teaching and encouraging technology skills at Greencastle Schools, State Sen. John Crane (R-Avon) was able to see this in action Tuesday afternoon.

The Fab Lab is a new initiative which aims to provide students access to prototyping technology with which they can create and problem-solve. It has been inspired by “e-labs” in Hamilton County Schools in Tennessee which are part of a collaboration with Volkswagen.

Crane also talked with students in Hamilton’s seventh-grade math class about his role as a state senator. In this, he tried to tie the importance of detail in math with how funding education factors politically as well as individually.

“There’s a lot of great things about the job, and one of my favorites is coming to visit schools and being able to talk to young people,” Crane said firstly. “But it is also one of the hardest things I’ve ever done.”

This, he stipulated, is because it is difficult to make everyone happy with the decisions one might have to make in a leadership position. He linked this with lobbyists coming to him and advocating for a specific issue or cause.

Where the math came in specifically was with budgets, in which every family, school corporation and community, as well the state, has one. With students not being close with their guesses, Crane stated that Indiana’s is estimated at $37.4 billion.

Whether or not they liked math, Crane suggested that without having the money for the budget, they would not have Hamilton as their teacher. As such, a decidedly large portion of the budget goes to compensate for employees in public school systems. 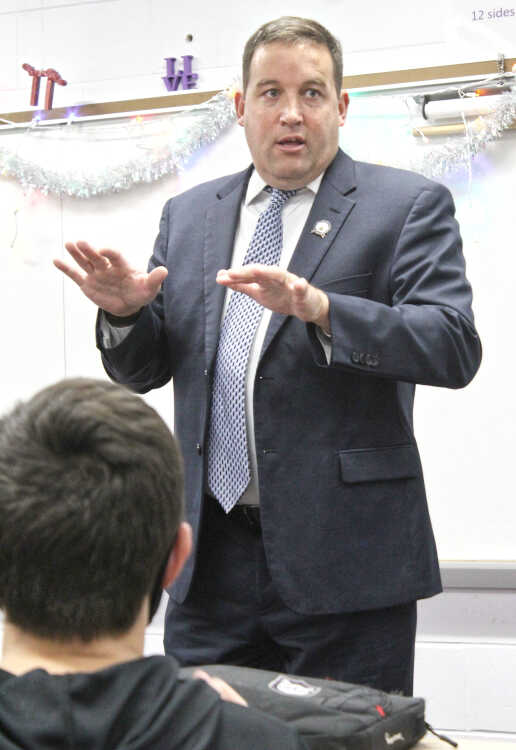 Using a pie chart, Crane illustrated that around 50.5 percent of the state’s budget goes toward K-12 education. For higher education, it is 13.5 percent.

“‘Senator Crane, you need to make education a priority in Indiana,’” Crane provided as a common criticism. “I try to gently say, ‘I would encourage you to take a look at the budget.’ In Indiana, there is nothing bigger that we spend money on.”

Besides this, Crane pressed on the “Why?” behind the purpose of education. The addendum here was what it might mean to be successful. He gave being on a basketball team as an example, in which it is about more than wins and losses.

One student said their definition of success was having good grades in school. Crane responded that this depends on whether a student is trying or not. The question is doing what with the time they have in school.

Crane then asked the students a “passion” question: If you could grow up and do or be anything, and you knew you would not fail, what would it be?

One said he wanted to be a professional basketball player. Another said she wanted to be a NASCAR mechanic. For Crane’s part, many want to be the next Stephen Curry, but would not want to put in the work.

Finally going back to math, Crane said details matter. Moving the decimal point in the budget number changes many things. In terms of education and extracurricular activities as a whole, it is about potential.

“What you may discover is (you) get into it and (you) realize, ‘Eh, this isn’t quite what I thought,’” he said. “‘But I did notice this piece of it and I’m beginning to really like that.’ Pay attention to those cues and clues.”