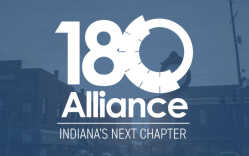 Having applied for $47 million in state funding for regional development, the six-county region that includes Putnam received word this week it would receive $20 million instead.

The 180 Alliance, a new partnership that includes Boone, Hendricks, Johnson, Putnam, Montgomery and Morgan counties, formed earlier this year when the state announced that 10 regions would be awarded $50 million each in Indiana Regional Economic Acceleration and Development Initiative (READI) funds.

With applications from 17 different regions, however, Gov. Eric Holcomb, Secretary of Commerce Brad Chambers and the Indiana Economic Development Corporation (IEDC) Board of Directors instead chose to divvy up the $500 million between all 17 regions that between them represent all 92 Indiana counties.

Here in Putnam County, local officials are still unclear on what the partial funding — rather than a simple yes or no to the full amount — will mean to projects across the region and in individual counties and communities.

Greencastle/Putnam County Economic Development Director Kristin Clary emphasized that region and local leaders are grateful to be funded, but need to meet with fellow 180 Alliance members as well as state officials to see what it all means. One question is whether the state will pick individual projects or give regions autonomy.

For now, Clary and other local leaders have found it rewarding to work with others in the region.

“We learned a lot through the process,” Clary said. “We really enjoyed working with the other five counties we worked with. It was really a learning process for us, and we were grateful for the opportunity.”

Even the formation of the 180 Alliance was the subject of some controversy as the process moved along. For Putnam County, it meant leaving the Terre Haute region with which it is often grouped when the state is divided into regions. The same was true for Montgomery County, which has often been pulled north with the Lafayette area.

For Boone, Hendricks, Johnson and Morgan, problem was with Indianapolis, with Marion County going to the state to challenge the existence of regions that didn’t lump the “donut” counties in with the state capital.

“The reason we chose those counties is because that’s where the growth comes from and we want to be the next place to experience that growth,” Clary said. “It has been great to grow those relationships, and I hope it will continue. We are just hoping that the state comes up with some more money so we can move forward.”

Clary said she believes there may be potential for further funding, which is encouraging for project such as bringing wastewater treatment to Heritage Lake as well as solving housing issues locally and throughout the region.

Holcomb has said he plans to approach the Indiana General Assembly to allocate more funds for this and similar initiatives in the future.

“Our economy is roaring after shaking off the effects of the pandemic, and now is the time to really put our foot on the gas and help our communities grow,” Baird said. “As a member of the House Ways and Means Committee that crafts the state’s biennial budget, I supported the funding for the READI program, and I’m impressed by the number of communities that have come together to invest in our state. The depth of teamwork in these proposals demonstrates that Indiana is preparing for the jobs of tomorrow and the quality of life needed to continue growing.”

The state reported that total requests tripled the allocated $500 million READI budget, as submissions from the 17 regions amounted to more than $1.5 billion in demand and detailed nearly 800 projects and programs with a potential investment of $15.2 billion.

The READI review committee, an external seven-member citizen committee, reviewed and scored the plans based on the established guidelines and against other relevant data, including historical population trends. All 17 regions presented to the external review committee, allowing each region to present an overview of its plan to distill its vision, goals and strategies to positively impact the area’s quality of place, innovation, entrepreneurship, talent attraction and workforce development. Following the evaluation, the READI review committee members proposed funding recommendations to the IEDC Board of Directors.

The regions, with the counties the region represents, and their specific awards are:

The IEDC will begin to execute grant agreements with regions while providing training and guidance on federal requirements. Regional leadership will collaborate with the IEDC to prioritize projects and maximize investment.

Launched by Gov. Holcomb and led by the IEDC, READI builds on the framework and successes of the Indiana Regional Cities Initiative and the 21st Century Talent Initiative, encouraging regional collaboration and data-driven, long-term planning that, when implemented, will attract and retain talent in Indiana. The $500 million READI fund was passed by legislation during the 2021 session.

More information on the READI review committee, as well as links to download each region’s proposal and presentation, is available at IndianaREADI.com.