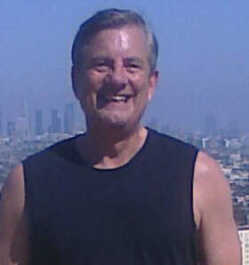 Kimball Alan Wilson, 65, took the journey of his life into Heaven on Dec. 15, 2021. He died in the arms of his beloved husband, Ayn Baltazar, in their home in West Hollywood, Calif., at approximately 5:30 a.m.

They had a commitment ceremony in October of 2008. In 2018 they were officially married, on Kimball’s birthday, in Las Vegas. They were together for 23 years.

Kimball grew up in Roachdale with his four siblings, Barb Wilson, Diane Bratton, Gregg Wilson and Lori Wilson, who survive. His parents, now deceased, were Howard and Marilyn Wilson.

He graduated from North Putnam High School in 1974. While at North Putnam, his passion was playing trombone in the band, he was in the Swing Choir and he loved performing musicals on stage. His love of “West Side Story” stayed with him throughout his life. From there his journey took him to Ball State University, where he was a member of Alpha Tau Omega fraternity and majored in landscape architecture, graduating in 1978.

Kimball had great fondness for the architecture of Frank Lloyd Wright and enjoyed helping friends and family with renovation plans.

He spent the next 12 years in Indianapolis working as a computer consultant and in sales. While living in Indy, he became a big fan of the Colts and the Pacers. He carried his love of those teams with him to California and continued to root for them until his death. His work, friends (of which he had many) and family were all important to him.

Every night he was lulled to sleep by TCM on TV— he loved the old classic movies. He enjoyed numerous walks up nearby Runyon Canyon and traveling with “My Man," Ayn.

Those wishing to make memorial donations may make them to www.Sageusa.org.