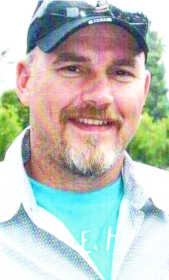 Born April 4, 1965 in Indianapolis, he was the son of Robert and Alice (Palmer) Thompson.

He was a graduate of the 1983 class at North Putnam High School. He then joined the Marines and became a sergeant as a firearms instructor. He traveled the world fighting for his country and serving others. After 12 years, he left the Marines to be with his family.

From there he went to 29 Palms, Calif., serving with 3rd Battalion, 7th Marines. From there he went to Okinawa, Japan, before heading off to Desert Storm and Desert Shield to protect his family and fellow Americans. Randy Thompson served honorably with distinction and with the highest honors of the Marine Corps values that any Marine would be proud to emulate.

As a longtime employee at Lone Star/Buzzi Unicem, he worked many positions, ultimately becoming a machinist and returning to school at Ivy Tech. He excelled in his classes and if you ran into him over the summer, he probably asked you if you could solve some of the crazy math problems he mastered in his assignments.

He enjoyed spending time with family and friends, fishing, hunting, country music, dancing, sweet tea, a good Bacardi and Coke, shooting anything he could get his hands on and sharing all of the orneriest jokes he came across.

Loved by anyone who knew him, he has been described as an amazing father, brother, uncle, grandfather and friend, having a genuine and big heart of gold, one of the best, an inspiration to everyone he knew, one of a kind, great co-worker, chatterbox, funny, witty, having a contagious smile with the big brown eyes and dimples, big giant teddy bear, sincere and a man truly worth knowing. His shoes are unfillable (figuratively and literally). His legacy, memories and strength will live on in everyone whose life he touched.

He was preceded in death by his father; two sisters, Michelle Selby and Melody Truesdale; son, Thomas Willison; nephew, Ricky Johnston; and great-nephew Jonathan Strong. His mother, Alice Palmer joined him in Heaven the day after.