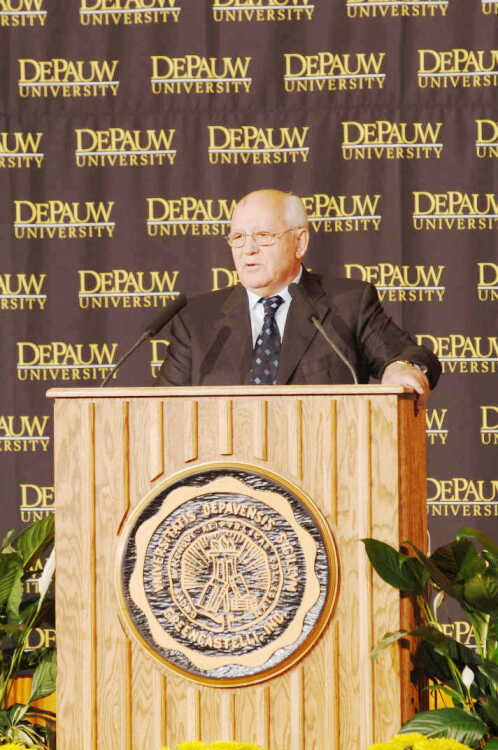 Soviet President Mikhail Gorbachev, who died Tuesday in Moscow at age 91, presents the Oct. 27, 2005 Ubben Lecture before an audience of 3,000 at DePauw University.
Courtesy photo/DEPAUW UNIVERSITY

The last leader of the Soviet Union, Mikhail Gorbachev, died Tuesday in Moscow and his death got me thinking about his visit to Greencastle and DePauw University on Oct. 27, 2005.

Former DePauw Public Relations Director Ken Owen and I have specific memories of that day, even though we came at it from varied angles.

While Owen was sent to the Putnam County Airport, being run by Dixie Chopper in those days, to greet Gorbachev in the absence of DPU President Bob Bottoms, I was in the midst of my seven-year tour of duty as Dixie Chopper Public Relations and Communications Director and headed that way when I heard that Gorbachev’s private plane had landed there.

Gorbachev, of course, was visiting DePauw on the Ubben Lecture Series that Owen still runs. The initial game plan was that the Soviet visitors would rest at the hotel accommodations provided at the Dixie Chopper Business Center at the airport and then proceed to campus for Gorbachev’s speech, press conference and a private meeting with donors and other DePauw bigwigs.

“We had reserved two rooms for Gorbachev and his team,” Owen confided Wednesday, “when unbeknownst to us, Gorbachev’s daughter came along on the trip. When he got off the plane, one of the first things passed along to me was, ‘We’re going to need another room.’”

That was going to be a problem because the other rooms there were all taken.

“So I had to go upstairs and knock on a door and see if people would leave for a while,” Owen added. “They were so gracious when I explained to them Mikhail Gorbachev was in town, the man who brought down the Iron Curtain, and it would sure be swell if his daughter could get in and use the room for a while.

“I’m still not sure how I pulled that off, but it did happen,” Owen said.

DePauw officials were also told that Gorbachev and his staff would not require lunch because he was getting in about two or three in the afternoon. But again, something must have been lost in translation as there was Owen with a group of hungry Russians staring him down and the Final Approach Restaurant at the airport already closed for lunch.

“The little restaurant was closed,” Owen explained, “because it was past the noon hour and people were wrapping up their meals. I had to go back and convince the guy who was cooking to stay open, or reopen as was the case, so Mr. Gorbachev and his friends could have a meal.”

At this juncture, Owen said he was needed back on campus, but as he left he caught a glimpse of a different kind of U.S.-Soviet relations.

“I saw Gorbachev and three other Russian guys in a room eating cheeseburgers with a bunch of guys wearing John Deere hats (I’ll bet they were Dixie Chopper hats). I wish I’d had a photo of it, but it was in the days before cellphone cameras so I couldn’t take a picture that day.”

One of those guys was Art Evans, founder and president of Dixie Chopper, who was eating lunch at the Final Approach as he did most days. That is where I come in as well.

Back at my office in the old Mallory plant, someone mentioned Gorbachev’s plane landing at the airport. When they suggested he was still there, I bolted out the door with my camera. I did get a photo of Gorbachev with Art Evans, turned it into poster size and it stayed on the hallway wall leading to the restaurant for years. Unfortunately, I’ve searched high and low for that photo the last two days without success. 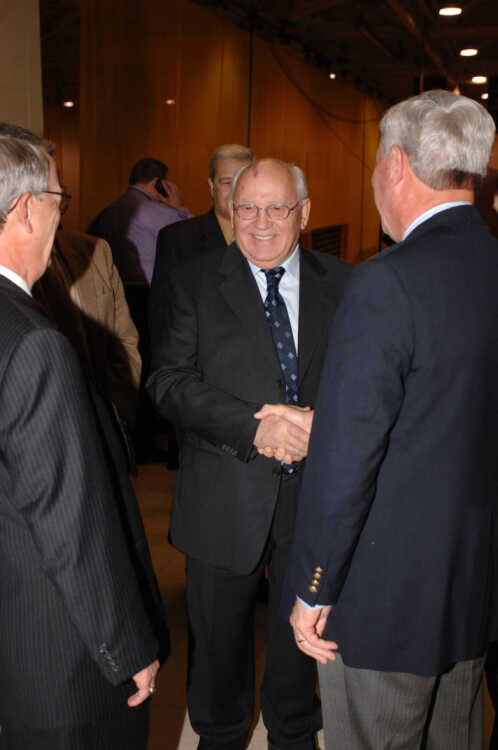 Meanwhile, Gorbachev’s penchant for going over on his time when he spoke was another curveball thrown at Owen.

“You set up things on campus but if he goes over, what’s ever at the tail end of the schedule is truncated and you’re kind of in trouble,” he lamented.

And Owen was. Gorbachev’s speech went at least 15 minutes long, which was cutting into the news conference scheduled backstage after the address.

“I went to the microphone and told the reporters we ran long and would only have about 10 minutes, which in news conference terms is a hiccup. You might as well not even do it. But it was promised and people were there and I was going to give them something.”

“I think his answer went seven or eight minutes, so there goes my news conference,” Owen thought as he announced there would be time for only one more question.

“With that, Mr. Gorbachev, who pretends he doesn’t understand English, which is my assumption anyway. He clearly got what I said, and before the interpreter could even tell him, he said ‘Nyet! Nyet! Nyet!’”

The interpreter explained further that Gorbachev said he was the president and he would decide how things were going to go.

“So like Charlie Brown, I tucked my tail between my legs and backed off and let Gorbachev finish his news conference, which wound up going 20 minutes, which again ended up causing problems with the schedule.

“So as we’re getting down from the dais, Gorbachev goes by me and says something in Russian,” Owen recalled. “The interpretor says, ‘Dictator!’”

At the next event Gorbachev was going to meet with the donors and bigwigs, and Owen told him he had a job to do and “wasn’t trying to be a jerk, but just trying to make everybody happy.”

“And he hugged me, to his credit,” Owen said, “so I guess I was a dictator for only a brief moment.”

Overall, Gorbachev “was a real character,” Owen said. “In fact, when we got him to the last event, he darted out a side door and was going down the street in Greencastle. His aides had to chase him down, you know there’s security concerns. He was like an eight-year-old kid saying, ‘I’m tired of this, I’m going to do something else.’”

Yes, Oct. 27, 2005 was a “pretty magical day,” Owen assessed. “We probably had 3,000 people in the gym at DePauw. It got a lot of coverage and was a really terrific day for the university and Putnam County.”

Gorbachev passed away Tuesday at age 91. “He’d been pretty quiet lately, and the early reports said he’d been ill for a while,” Owen said.

“It’s really tough to see these icons go,” he added. “This is a person who really changed the world.”

A full house crowds into the gymnasium at DePauw University's Lilly Center to hear former Soviet premier Mikhail Gorbachev speak on Oct. 27, 2005.
Courtesy photo/DEPAUW UNIVERSITY
Comments
View 4 comments
Note: The nature of the Internet makes it impractical for our staff to review every comment. Please note that those who post comments on this website may do so using a screen name, which may or may not reflect a website user's actual name. Readers should be careful not to assign comments to real people who may have names similar to screen names. Refrain from obscenity in your comments, and to keep discussions civil, don't say anything in a way your grandmother would be ashamed to read.
Respond to this story