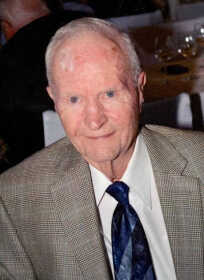 Dr. Ernst was of Protestant faith, raised in Sumner, Ill., and graduated from Sumner High School in 1945. He was a member of the varsity basketball team and band. He attended Vincennes University and the University of Illinois before graduating from the Kirksville College of Osteopathic Medicine in 1954.

Dr. Ernst served in the U.S. Army in Japan from his enlistment in 1946 to his honorable discharge in 1947. He joined the Cloverdale Hurst-Collins America Legion Post 281 in 1957. He was a continuous member and was acknowledged as the post’s longest active member.

In June of 1955, Dr. Ernst established a medical office in Cloverdale where he practiced family medicine for 48 years. Dr. Ernst provided care for five generations of local families. He was respected by patients and peers alike and was widely commended for his skill as a diagnostician and his kind, compassionate bedside manner. He spent countless hours responding to late-night and weekend calls, which frequently resulted in him making house calls throughout the rural area.

Dr. Ernst joined the board of directors of Putnam County Hospital in 1977 and served continuously until his death, including as board chairman. Putnam County Hospital dedicated the facility which now houses the Cloverdale Medical Clinic in his honor. While in practice, Dr. Ernst served as a member of the Dean’s Council at the Indiana University School of Medicine and as medical director of Cloverdale Donna Nursing Home.

Beyond his medical practice, Dr. Ernst was heavily involved in community service. Since 1970, he was a director of First National Bank in Cloverdale and served as chairman of the board. He was an active member of the Community Bankers Association of Indiana and the Indiana Bankers Association, which recognized his 52 years of membership. He was awarded the 1996 Civic Award by the Cloverdale Lions Club and was a member of the DePauw University Community Advisory Council. He was a generous benefactor of many organizations including the Franklin College Goaltenders, President’s Circle and Scholars Society.

In recognition of his selfless career as a physician and his lifelong commitment to community service, Dr. Ernst was honored as a Sagamore of the Wabash by Gov. Joseph Kernan in 2003.

Visitation will be Wednesday, Sept. 28 from 2 p.m. until 7 p.m. at Whitaker Funeral Home, 201 N. Lafayette St., Cloverdale. A private family service will be held prior to burial in Cloverdale Cemetery.

Condolences may be made at www.whitakerfuneralhome.net.