Imagine if this was the courthouse... 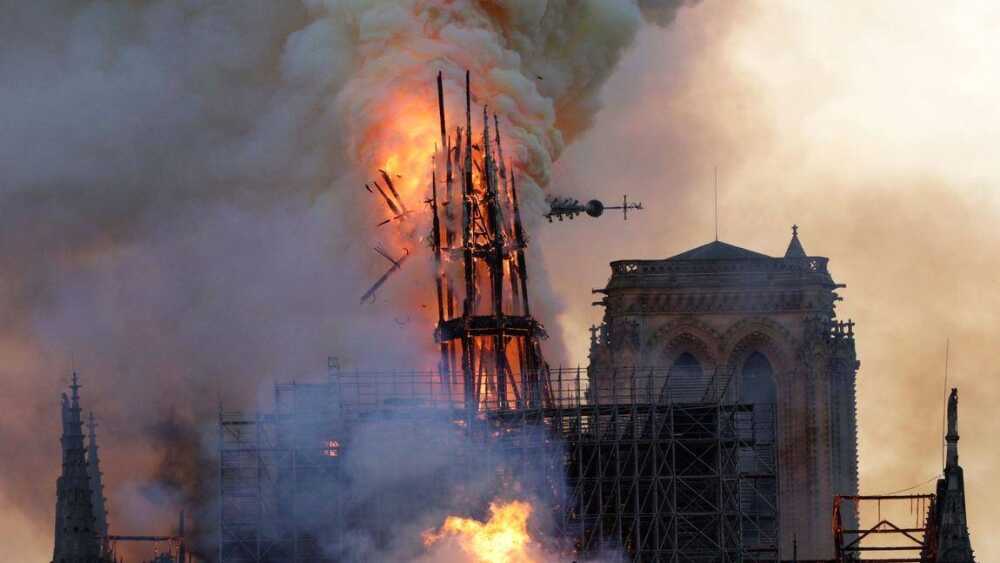 The wooden spire collapses during the fire that ravaged the Notre-Dame Cathedral on Monday. (Geoffroy Van Der Hasselt/AFP-Getty Images)

Maybe half-an-hour after I came back from lunch Monday afternoon, I first heard from Jared that the Notre-Dame Cathedral in Paris was on fire as he came into the newsroom from an errand.

"Someone's just told me that Notre-Dame is on fire," I remember him saying as he looked on his phone. It did not really hit me right away as to what he meant, though I knew instinctively that he was referring to one of the City of Light's most enduring architectural and religious monuments.

I didn't grasp that I wouldn't just see in real-time that the 13th-century church was burning - it quickly became apparent that the blaze was effectively out-of-control, and looked as if it threatened to destroy the entire building and everything inside.

I watched the cathedral's 300-foot wooden spire, itself a recreation of the original built in about 1225, collapse into the structure. "The spire's gone," I said to Jared and Eric, who had also turned his attention to what we could only see through news cameras. I think there was a sense of awe and disbelief between the three of us.

Church leaders and city officials have said that Notre-Dame's fragile rose windows have been preserved, and that the facade and twin bell towers have not been compromised by the blaze. The majority of the priceless relics and artwork which were housed there were saved. However, the greater part of the original medieval roof, along with the wooden interior that was described as a “forest" of lattices, was lost.

It's remarkable that Notre-Dame has graced the Paris skyline for over 850 years. By all accounts, it is intrinsically woven into Europe's history as a whole. It has survived the violence of the French Revolution and both world wars, and parts of the structure, such as its gargoyles, have continually been restored. Considered a prime example of Gothic architecture, it is renowned simply for its sheer beauty. Of course, the church is the setting for Victor Hugo's 1831 novel The Hunchback of Notre-Dame.

I won't profess that I can fully grasp the cathedral's majesty or sense of place, because I have not been fortunate enough to visit. The only time I've traveled out of the United States is when I went to southern Germany in 2015 as a part of my German studies at Wabash. While in the university city of Tübingen, I saw historic buildings that were spared from Allied bombing because the area was considered culturally significant.

With that in mind, I feel it's useful to think about what our reactions would be if such a locally important place like the courthouse had burned in a similar way. Would we feel the same sense of loss as Parisians do now, after watching such an integral part of the city's landscape and our continuity as a county go up in flames?

Understand that this scenario is purely hypothetical on my part, and we can be confident that the extent of such a fire wouldn't be as great. But in light of what happened at Notre-Dame, to me it invites questions about our awareness of places which we might take for granted, and then may only recognize their value afterward.

The fire is not a sad event for Catholics and the French exclusively. Notre-Dame's unique elements have inspired architects, artists, musicians, historians and tourists alike for centuries. The church is irreplaceable in this way, and that is why I think the aftermath, though minimal in the grand scheme, has resonated so much.

I find it incredibly heartening that over $700 million has already been pledged for reconstructing what has been lost. The carry-on attitude that the French people have shown has also been inspiring, and I think it's because they know that Notre-Dame has seen just as much destruction before, and can be renewed just as well. I think that President Emmanuel Macron encapsulated this, even as the fire continued:

For those who may share that sense of loss with Paris, and also recognize a determination to see Notre-Dame rebuilt, I hope that this resolve further emphasizes how necessary it is to preserve what we have - as well as to persevere and make anew.