Doing my due diligence 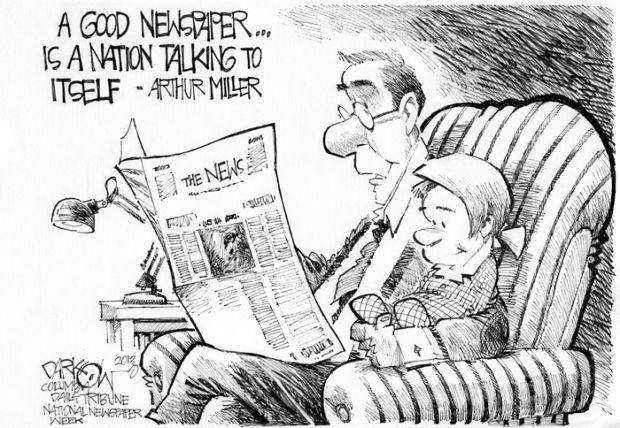 In the bustle of the daily grind here at the paper, I recently had what could be counted as a "teachable moment" as a reporter, as well as a community member.

A week ago, I got a call from someone who was at the forefront of issues which I reported in a recent article. It didn't necessarily put the individual in a positive light, and he wanted to tell me that he took exception with my detailing of what occurred.

First, he pointed out an inaccuracy regarding his position in a local homeowners organization - one which I owned up to up-front and said had been corrected. I think that this took him off-guard a little bit, but this really was not the point of the call.

As I remember it, he approached our conversation as if I had purposefully highlighted his business dealings for a sensational story, and made the claim that I had not done my due diligence in not contacting him for "(his) side of the story." He also suggested that his reputation had been put at risk on social media because of the article.

Though I remained open and let him speak his mind, I pushed back on him regarding my "lack" of thoroughness with regard to the article's content. What came out of this were further realizations about my reporting what was said and its context.

I told him that I couldn't help that he was at the center of this criticism, and that I reported what was said in a public setting. I told him that what he and others openly expressed therein were fair game. When he suggested that a town official (one who I've come to trust to give it to me straight) was a crook, I said that was his opinion.

After I hung up the phone to get back to working on an article I had started, Jared spoke from across the corner and said that I had handled the call graciously. He thought that I had held firm, but had not let it become a shouting match.

While we were at odds on the points I pressed him about, the conversation between us, for the better part, was civil in tone - something that I frankly did not expect.

This conversation led me to reflect on what I've learned as a reporter continuing to build credibility and a rapport within the community. It also invites an opportunity to think about what it means to be diligent, and about the expectations of the media.

I've been at the Banner Graphic covering town councils and school boards coming up on a year now. I'm almost constantly figuring out how to adapt to the situation, and to be professional and stay focused doing it. Ultimately, consistency is key for us up here.

I have said before that I am still learning; that hasn't change. However, what I hope readers take away from this is that I base my conduct on principles which I think are uniform between Eric, Jared and I. They apply to a scenario like this especially when our sincerities and motives as reporters may be put into question.

We own up to our mistakes when they are pointed out in good faith. I did not, and will not, shy away from the one in the article, and it is not the only mistake in general that I've made. That being acknowledged, I stand by the integrity of my stories and my reporting the big picture, and no unfounded critique after-the-fact will influence that.

It is one thing when a person being singled out does not, or cannot, initially provide a response. There are situations where it's necessary to touch base so he can clarify his position on an issue (e.g. allegations being brought against administration at Cloverdale High School). The individual's points in the article were not ambiguous, and he owned them. There is a level of responsibility that applies to both sides.

Unless someone gives me a compelling reason not to, or is being humorous (when that happens, there's an understanding between us), it's our prerogative to report what has been said in context. Though a quote may not be word-for-word, I'll make certain that it will be close, and that its spirit will be maintained - whether good, bad or indifferent.

By some accounts, the article got people talking. That's a good thing from my perspective, because it drew attention to issues community members care about. The story was not a rag on the person, and that's the bigger part of what has led up to this.

This "teachable moment" reinforced the importance of sticking to my guns, and also how integral it is to try and understand the bigger picture as a citizen. #SmallTownPR demands that, and I will continue to do my due diligence in serving this community.