The ringing in my back yard 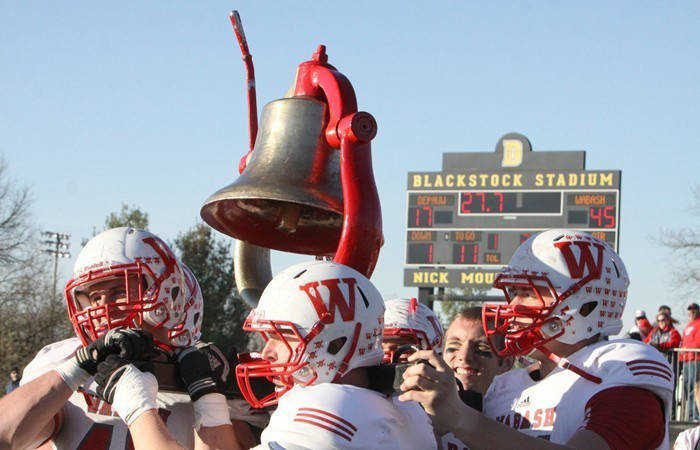 For many connected to my alma mater, this is the most wonderful time of the year. I would like to think quite a few at DePauw see it the same way after the last few games.

A consistent statement I've heard being taken as matter-of-fact is that Wabash takes the annual contest for the Monon Bell much more seriously than the "Dannies" do. The further addendum is that DePauw only cares about the Bell during this one week.

The sixth-oldest rivalry in Division III football is one which inspires Wabash students to sit on the steps of Pioneer Chapel and ring the Bell almost non-stop throughout the day. We have a Chapel Talk on the Thursday before the game, during which Coach Morel and the team captains up the hype (and a little of the boastfulness) even more.

I have taken to saying that the Monon Bell game is one day a year. Both DePauw and Wabash should be willing to work together to support each other as top liberal arts schools aside from it. That being said, I don't hide the fact that I went to Wabash. I'm proud of being a part of the supportive community that its connections try to foster.

As a Greencastle native, I am happily in the middle of the rivalry between Wabash and DePauw. As a reporter for the Banner Graphic, I've developed positive rapports with some at the university, who in turn have expressed gratitude for my coverage of events like the Ubben Lectures. A light-hearted jab will come my way every once in a while.

While the rivalry has had its moments - both iconic as well as destructive - throughout the years, I think we have recently seen a surge in enthusiasm, especially from the DePauw side. The windows painted by the Sphinx Club my freshman year may have stirred up the campus some, but there is one particular game which made an impact.

I believe that the wake-up call finally came in 2016 - after DePauw snapped Wabash's seven-year dominance with a nail-biting 37-34 win on the Little Giants' own turf.

I would be remiss if I did not acknowledge that Wabash suffered tragic losses before this game. Austin Weirich, then a junior on the football team, committed suicide the previous September. The class of 2019 also lost Luke Borinstein, who was killed, along with his mother and younger sister, in a horrible plane crash the month before.

I'm certain a fire was lit under DePauw after they brought the Monon Bell back to Greencastle that day. It showed that Wabash could be beaten, and the game taught the lesson of not taking a winning streak in this rivalry for granted. Perhaps a sense of real excitement was ultimately restored after the revelry - and the sorrow - had subsided.

However, someone might suggest that 2016 has turned out to be a blip in the record. Wabash has won the last two games since. The Little Giants still lead the overall series, and have taken and returned the Monon Bell to campus more times than DePauw has.

This football game will still remain unpredictable. I don't think the wins and losses up to now mean much when it comes to judging the determination and passion which has remained evident. If you take away the slanders and the unsavory slogans, this rivalry is a constructive source of pride for both schools, and for my hometown as a whole.

I will proudly be on the Wabash side of Blackstock this Saturday, and I look forward to seeing the entire home section packed and loud throughout. Let's have a good game.