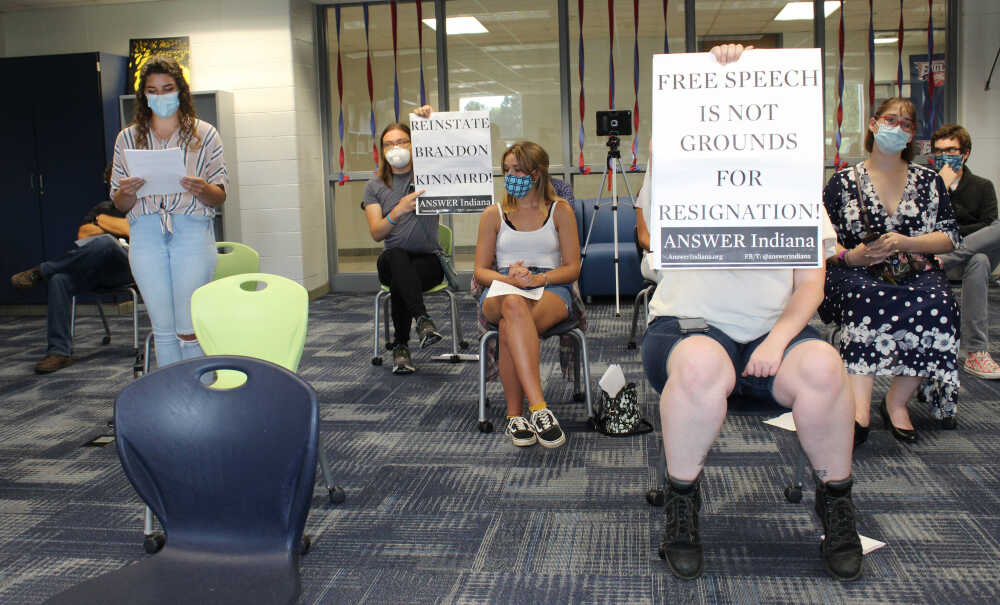 I will remark here at the outset that I cannot hope to clear much of the air about the recent controversy with South Putnam and former Spanish teacher Brandon Kinnaird.

However, after debating about whether to let it run its course and not say anything at all, I feel it is necessary now for me to respond from the news side as to my role in this.

Ultimately, my job was reporting what South Putnam parent Amy Clark said during the South Putnam School Board's regular meeting a few weeks ago. The controversy has become more precipitous with Mr. Kinnaird's resignation due to "pressure" which he has faced from the community. I have sincerely hoped it would not come to this.

I can't fully address the political or social ramifications here, which could be boiled down to free speech. No one should unduly speculate about the motives of the school board or the administration at South Putnam High School either. It's not fair to them.

Rather, I want to address the accusations that I and the Banner Graphic sought to slander Mr. Kinnaird. I also want to respond to different people's talking-to as to my ethics as a local journalist -- one who is committed to highlighting the successes of students and staff at South Putnam, as well as those at North Putnam and Cloverdale.

After the article was on our website, I got a nasty call from someone who claimed to be a friend of Mr. Kinnaird's. The caller argued that he didn't know about Ms. Clark's comments until he read it. (The meeting was available on YouTube long beforehand.)

He also cast the article as a closed-door conspiracy between me and the school board.

There may have been rumors about all of this prior to the meeting. Never mind that this was a personnel issue, and that many people have questioned whether an open school board meeting was the appropriate forum for such a statement to be made.

It has been argued that my restating her comments verbatim in the article gave her a platform, and that I was supporting her views. The bottom line is that Ms. Clark's statement was a public one that was presented during a public meeting. No counter-arguments were provided by others in the audience; she was the only one who spoke.

I have seen one individual ask why the Banner had to publish the article when Ms. Clark's statements could be seen online. This begs a considerable question about the part we play in the community as your newspaper. However, I believe that suspicion still would have accompanied a one-line mention of them under "other business."

As to anyone's belief that my article was a scheme between me and the school board to get Mr. Kinnaird fired, all I can say is this is absolutely ludicrous. I was at the meeting as a reporter and a community member, and Ms. Clark's comments were news to me.

This wasn't a one-minute complaint. Hopefully for the better, it inspired discussion.

Could Mr. Kinnaird's "input" have been included? Was it easier said than done with school out and no direct way to get his personal contact information? The answer to both of these questions is Yes. This is a fair criticism when it is given in good faith.

Mr. Kinnaird and those who are supporting him are welcome to send the Banner Graphic letters to the editor, and I have no qualms with anyone either defending or criticizing his actions. Indeed, many did speak up as such during the school board's special meeting Wednesday evening after they approved Mr. Kinnaird's resignation.

Neither Superintendent Bruce Bernhardt nor the school board have taken a stance on whether or not they supported Mr. Kinnaird's protest. In the same vein, anything said outside of this about him being forced to resign is not sustained in it being voluntary.

As to my rapport with school leaders and teachers, and to my bringing readers what happens at these meetings, I and the newsroom will continue to stand by my work.

The article portrayed Ms. Clark's comments as she provided them. It is thus up to the reader to decide their meaning and intentions, and whether they are right or wrong.

On the whole, I think this controversy is representative of our divides with protesting police brutality and knowing not all of them are bad. More locally, it has shown how a news article can be weaponized. We have to be more cognizant of this moving forward.

However, the indictment that I wrote my article with malice toward Mr. Kinnaird is emotionally assumptive, and dismisses the big picture as to why we're talking about it.

Those who take exception with Ms. Clark's comments -- and with how the school-community responded to them -- have an issue with her views, and not the reporter.

This week's blog post was published in the July 31 edition of the Banner Graphic.