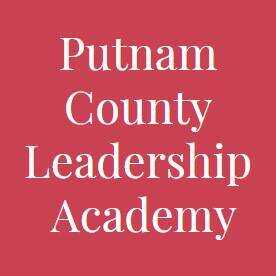 Last Monday, I tagged along with the 2021 cohort of the Putnam County Leadership Academy on a whirlwind tour. We also had a very special individual be our tour guide.

Jinsie Bingham was an entertaining one to boot. What makes her remarkable, though, is how she is an invaluable wealth of remembrance of how things were, and also have changed, in Putnam County over many years. She has been right here her entire life. 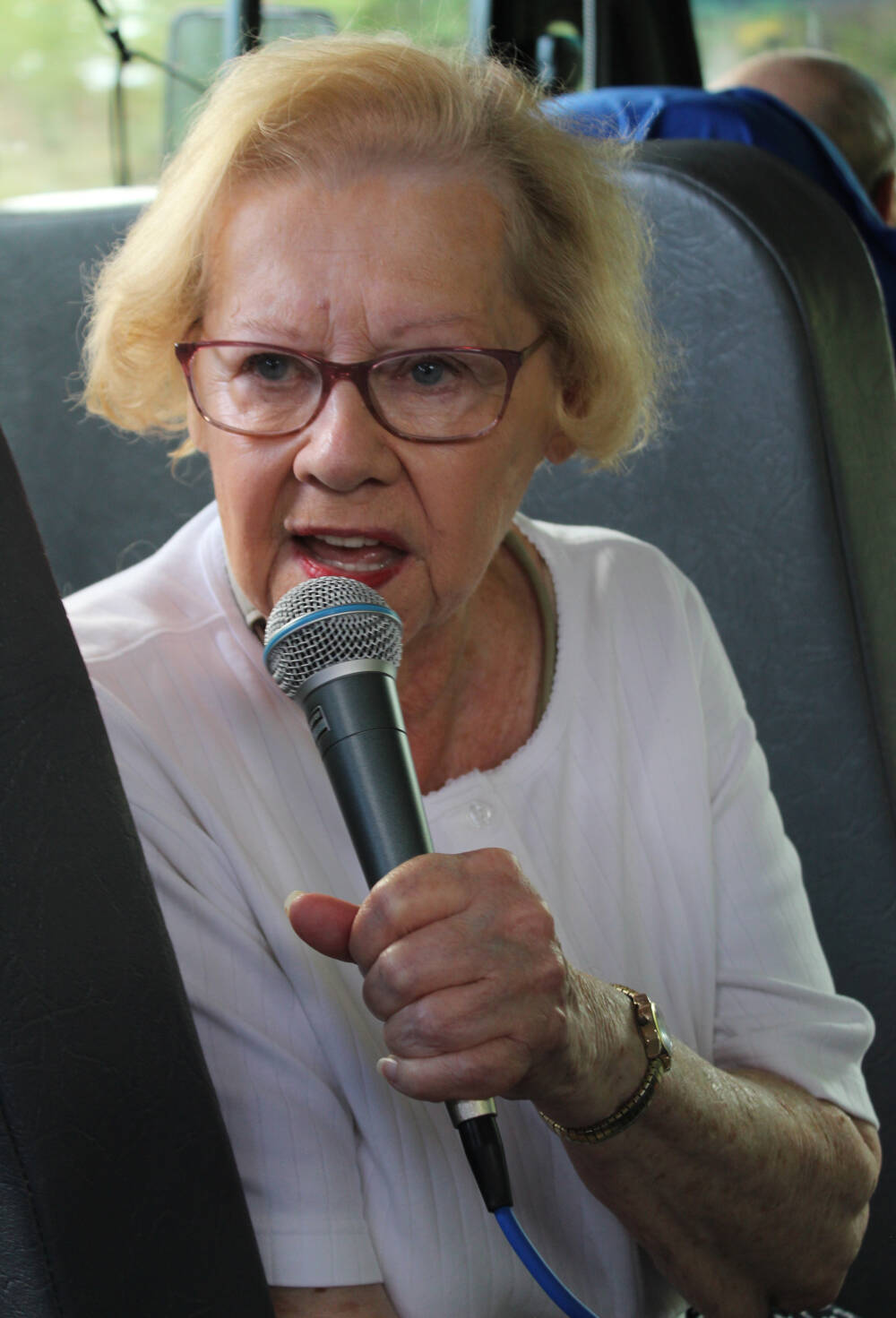 I can't recount all of the stories and the nuggets of information she told us as we made this big circle around Putnam County. Some of it was new to me.

I didn't know Veterans Memorial Highway was once a railroad. I didn't know a Putnam County native was a dean of the School of Education at Indiana University. Or that Eli Lilly's father-in-law supplied his "cough syrup" to DePauw students.

We began in Greencastle, went Manhattan Road and eventually drove past Lieber State Recreation Area. As a treat, we briefly stopped to see Cataract Falls. Jinsie said that though it's in Owen County, Putnam people can claim it too. It is one of those places we can be proud to have accessible to us.

I appreciate one comment Jinsie provided. She said that Greencastle in particular is a city of volunteers. They "go and do" with the goal of making it a great place to live and work. She brings to mind an important question we faced as a cohort last year: What kind of community do you have? When people here "catch" onto something that stands out, they'll want to be a part of it. The community can "meet itself" and act on this passion.

After seeing the falls, we came back into Cloverdale and then drove through the tiny burg of Belle Union. Once we got back onto U.S. 40, we stopped at Chandler's Farm.

Visiting inside the country store, owner Jerry Chandler said the farm has been in his family for 46 years. Seventeen of its 52 acres is devoted to growing different kinds of apples. Through a real labor of love, the farm has steadily grown from its original 230 trees. I myself took home a half-peck of Spencers, and I hope I can go back sometime. 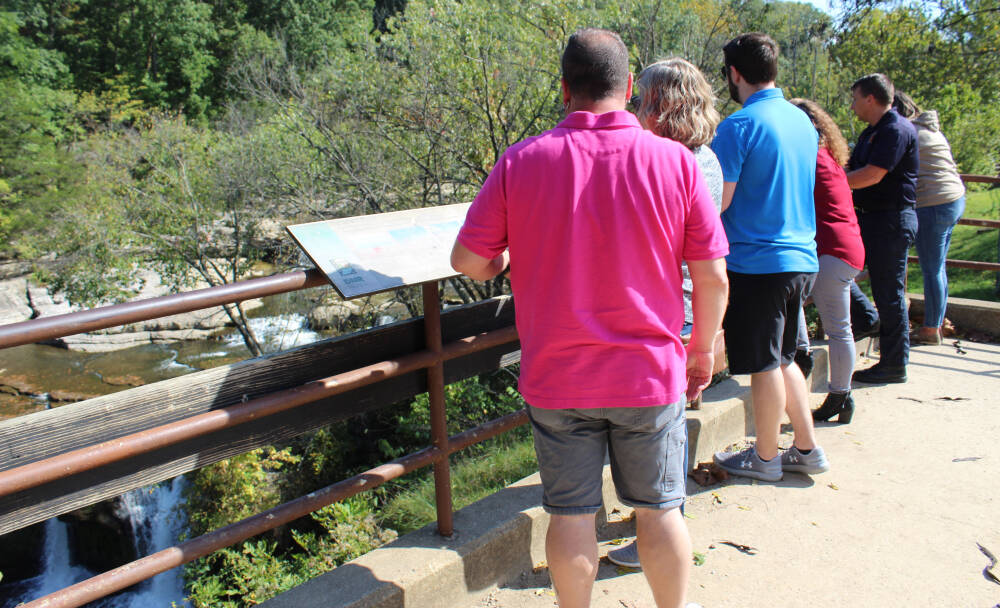 As we made our way back to Ivy Tech in Greencastle, we took a drive through Forest Hill Cemetery. Jinsie recounted the grisly story of Pearl Bryan. She was a Greencastle woman who was murdered by two dental students near Cincinnati in 1896. She was buried here without her severed head. Visitors will put change heads-up on her grave.

As an amateur historian and perhaps a local reporter, stories, traditions and folklore as Putnam County history are always interesting to me. People like Jinsie are the ones who have preserved them. It's up to the rest of us to pass them down to our children. 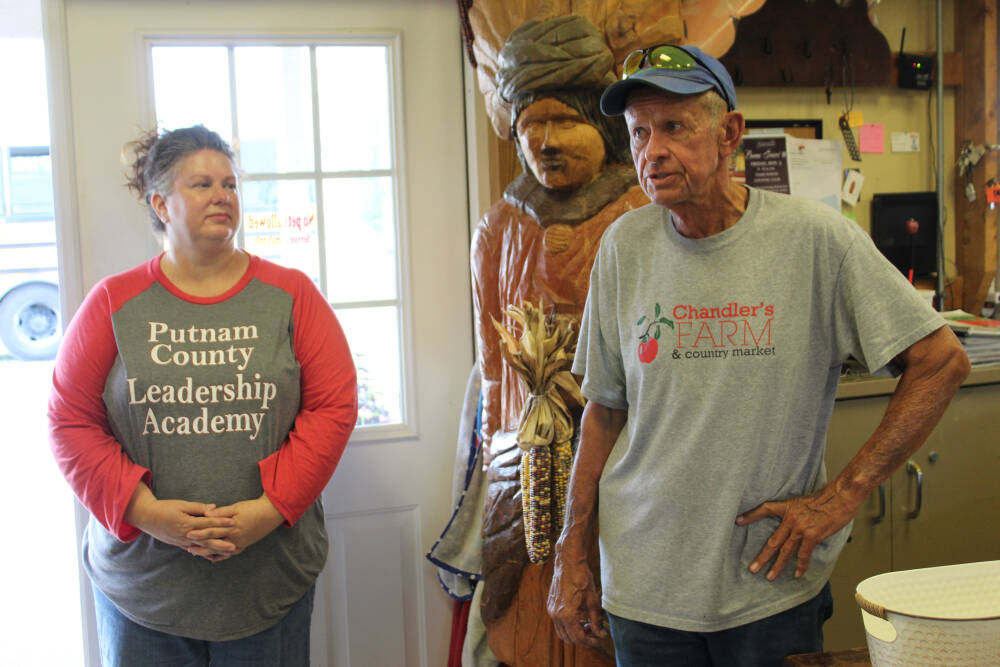 Still, as a Greencastle native and a reporter, this tour and having Jinsie along helped me appreciate the resources we have even more. It was great to come along and get involved with the new cohort. I will have another opportunity to do so coming soon.

I plan to join the cohort in two weeks for another tour, on which they will learn more about our businesses and industry. Greencastle/Putnam County Development Center Executive Director Kristin Clary will lead this one, and I will be looking forward to it.

This post was published in the Friday, Oct. 15, 2021 edition of the Banner Graphic.