'Ole White' could get at it 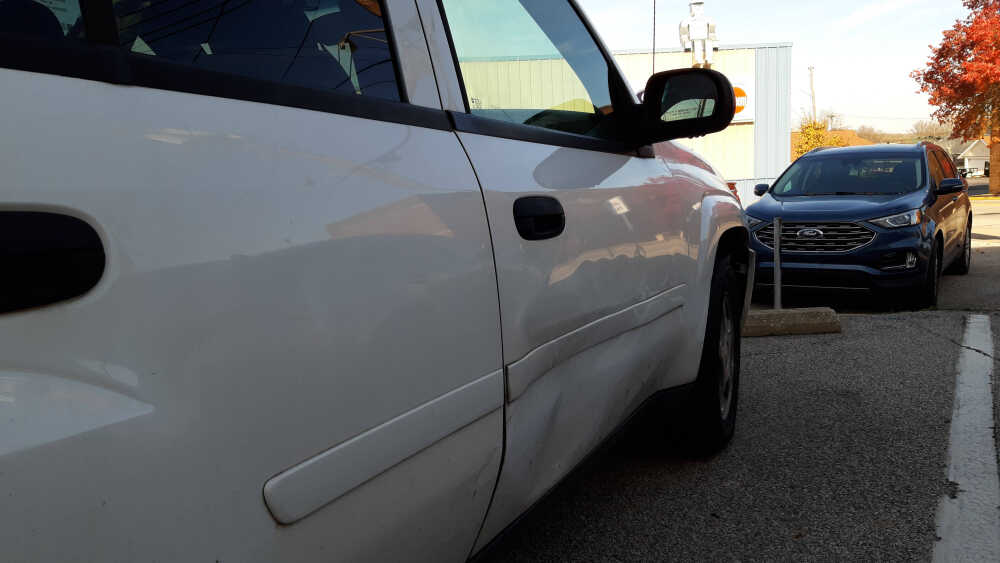 The aftermath of a deer inadvertently (...) ramming into my vehicle Wednesday evening.

I have had my 2007 Chevrolet Trailblazer since before I came to the Banner Graphic more than three years ago. Except for maybe one car crash I can remember, I have driven it to every event I've covered. It has issues but has not been truly unreliable.

I think, for a while now, it's been that the firefighters and police at any given scene know it's me. I mean, if anything, the Wabash College decal on the back gives it away.

My car has always been dirty. It is scratched up. It has gotten scuffed on the square by a semi which couldn't quite make the turn onto Washington Street. It'll never be in a "presentable" condition by any means. You could say it has battle scars to show for where I've gone and have done. It isn't glamorous, sort of like how my job usually isn't.

It acquired another one of those scars — a fairly large one — Wednesday evening while I was traveling on State Road 236 to the Russellville Town Council's regular meeting.

A deer popped up on my right side and rammed into me. I don't know whether it had a rack, but I felt the impact. Nevertheless, I continued on relieved I could still drive it. Indeed, besides the dent on the door, the only damage is the busted front turn signal.

I want to thank Russellville Town Marshal Matt Biggs for drawing up a report, and for getting my window down after I locked it with my keys in the ignition — and with it running — like the loser I can be sometimes. I appreciate customer service like this.

After I made a post about the deer on Facebook, someone commented that "a few good stories" would come out of "Ole White." I don't really have a kind of endearment to my Trailblazer; it's just my regular vehicle. Again, it isn't glamorous or meant to stand out. It is truly the opposite of my Beetle, though we built that thing to drive, too.

I have never given it a pet name like some would with their vehicles. It strikes me as a little odd, but to each his or her own. I just don't have affection attached to it. Still, I see a point behind the comment. I perhaps consider it as being a connection with the experiences I've had as a local reporter. If people identify me with it, that's just as well.

I guess "Ole White" might get at it having some meaning beyond just being my car. My run-in with that deer perhaps added a little more character to it. There is a first time for everything, and this was one of them. I'm glad this wasn't as bad as it could have.