There when hope — and traffic control — is needed 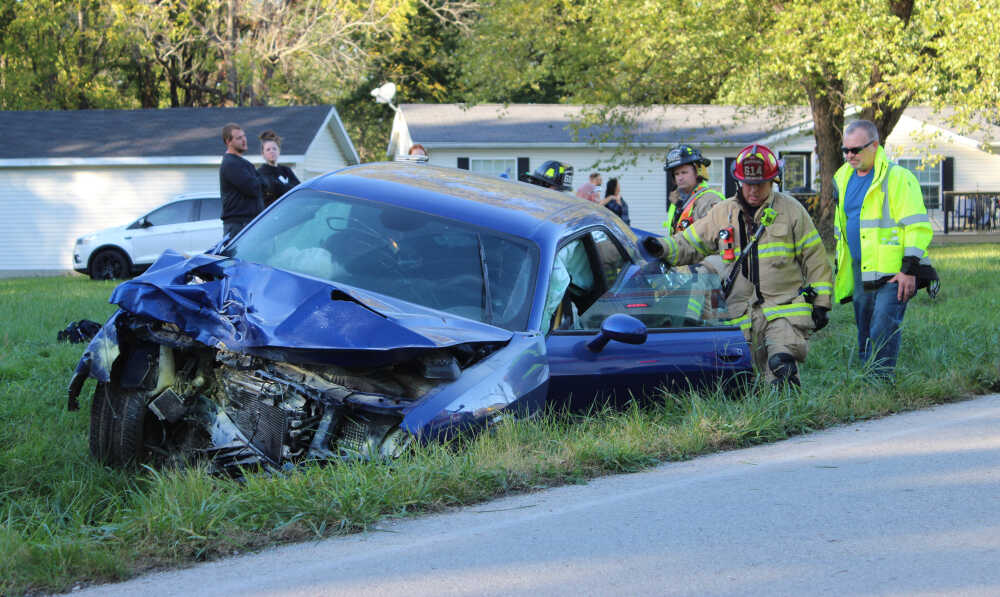 Greencastle firefighters tend to the scene of a recent crash on Manhattan Road. Chaplain Donnie Watson is to the far right. (Banner Graphic/BRAND SELVIA)

I would generally describe myself as an "open" agnostic in terms of religion. I don't outrightly deny the potential existence of God or gods. Religion to me is as a coping mechanism, and many take exception with this interpretation. This is okay, though.

To me, religious faith gives people purpose, however someone wants to define that. It provides encouragement or a way to reel in events and circumstances. Social groups are grounded in shared beliefs. Religion as a coping mechanism gives both structure and meaning. This is fairly simplistic, but it can also dictate how we treat each other.

Where I want to go with this is that people want hope. I think it is onerous to attempt discussing faith as a topic here. Rather, I want to highlight one particular man of faith.

Donnie Watson is the pastor at New Hope Fellowship just outside of Greencastle. He is also the Greencastle Fire Department's chaplain. Indeed, his son Brandon Watson is a firefighter over at GFD. Donnie might be considered one, too, but he has a different purpose. This purpose is to offer a hand and an ear during someone's worst moment.

Here's the thing: If GFD or any of our first responders don't go out on any given day, that means that someone is not having the worst day of their life. I think there's a lot of humility that comes with understanding this. Nevertheless, there are few "Q" days. We have seen our fair share of destruction and tragedies. We just keep at it, though.

As a first responder, Donnie will assist with things such as directing traffic, like he did with the recent rollover near the viaduct, or simply handing out water. He will always try to be on traumatic incidents in which people may be seriously hurt — inside or out.

Donnie was there at that house fire south of Barnard Monday evening. I won't go into specific details, but this was one where everyone was hoping for the best and prepared for the worst. He assured the homeowner's relatives who were there, as well as trusted me wholly with the sensitive information he gave me. That alone is all I'd ever ask for.

Monday night was a late one for this reporter. I'm glad I stuck through it, not just to get information, but because Donnie shared something with me that has resonated.

He recounted how he and his wife had a house fire years ago that was a total loss. He said the only thing that survived the blaze was a hamper of clothes. He clarified, after I asked, that these weren't just random articles of clothing. They all went on their backs.

I told Donnie I wasn't all that religious, but that this seemed very "God-like" to me.

"You know what, it kind of is," I remember him saying. If this, as well as the support they received afterward, weren't cues, he may not know what would be. He "gets" it better than I will try to seem sometimes. People like him are pretty good ones to have around. This is especially in times like those when hope might not feel that realistic.

I want to try and contextualize my work as a journalist and my life in general in ways people like Donnie can. I will still be a "skeptic" in those religious terms. However, it's important to think about who can really be in your corner when the going gets rough.