A broken leg can't become a fall from grace 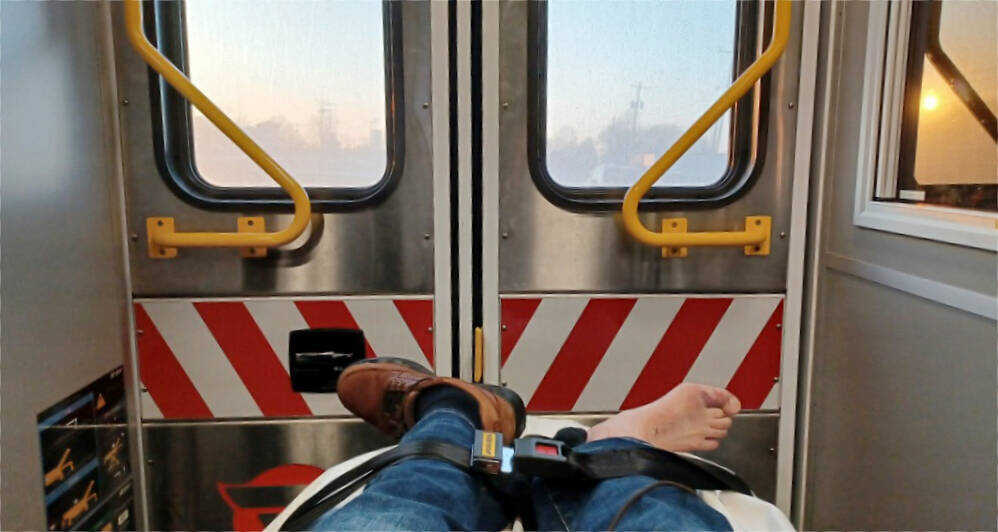 When the freezing rain came through our area back on Jan. 8, I thought about falling and hurting myself. At the same time, I didn't think twice about going to a four-vehicle crash at the bottom of Plessinger's Hill, it being one of many incidents which ensued.

Because of how I walk with my spina bifida, I can be hyper-aware of losing my balance and going down, whether it be on ice, narrow steps or just tripping over something. I still assumed that risk in being there. I had a job to do. It was just that sense of duty. I've been told that I shouldn't have been there, but I can still trip at any other scene.

But there has always been that one that could result in more than a bloody kneecap. It happened to me almost four weeks ago now, and it is now challenging my paradigm.

I think we can take for granted how Murphy's Law works: Anything that can go wrong will go wrong, it's just a matter of what and to whom. I am just not particularly lucky.

A week after the freezing rain, I was up in the office finishing two stories, one a wreck on Washington Street in Greencastle and the other a single-vehicle incident near the viaduct just north of the city. I was heading out our side door when I slipped on a slick spot on the concrete ramp and fell squarely on my right leg. The pain was immediate.

I knew I was in trouble when I couldn't move my leg. I was actually on the pavement near both the ramp and the guardrail that is up against the building. I guess through sheer willpower, I heaved myself so I could sit on the guardrail. I heard the crack. Yet, except for the pain in my leg, I felt very much with it. Call it being matter of fact, even.

I then called 911 after I couldn't get ahold of Mom. (I maybe surprised the dispatcher a little with just how calm and conversational I tried to be. She didn't get any hysterics with me.) Greencastle firefighters Kyle App and Brandon Watson then found me two minutes later, with Putnam County EMS coming soon after. I was embarrassed by it.

They loaded me into the ambulance, and I was in the emergency section at Indiana University West within about an hour. I didn't necessarily refuse medication; I just simply didn't want an IV stuck in me at this point. A silver lining to the spina bifida is my pain tolerance being high. (Think sutures sewn into a toe without an anesthetic.)

The kicker is that we were fortunate to not get diverted or forced to drive around in circles. It was sort of surreal to see patients just stacked two deep out in the hallway.

I saw the X-rays and was told that my leg was broken. I remember the IV being put in. I was moved to my resident bed and my parents had to leave and come back. It seems like a blur from this point until waking up the next morning. I still feel how hungry and thirsty I was. I will never understand how any sane person would want morphine.

Call it being anxious instead, but I was scared before the surgery. This certainly wasn't the first time, and there was hope that my previous operation (having part of a toe amputated, hence the sutures) would be the last. There was anger mixed in with one.

Maybe four hours later, I woke up with a rod in my leg — and with a lot of uncertainty.

I spent the next three days in the hospital. It was rough to say the least. I often meted out my frustrations on the nurses trying to do their best with the protocols they follow. Nonetheless, my resolve was punctuated the moment I got out of bed for the first time.

I was happy to finally get discharged. It felt validating to get showered and dressed there despite the pain. I was exhausted by the time we got home and up our porch. It was good to finally settle into my makeshift bedroom where the dining table usually is. Besides going to my post-op last week, it has been a space that I am thankful to have.

I think the greatest milestone so far has been being able to get up to the second floor. Until recently, getting a full night's sleep has been impossible because of how my leg has hurt from the stretching required to put in the rod. Nonetheless, I've been able to get around with my walker. Put one foot in front of the other, as Kris Kringle sings.

It will be four-to-six weeks before the bone can be mended, and this will be when real gains mobility-wise can be made. In the meantime, it's been about trying to work the calf and quad in physical therapy so those muscles can get a little stronger every day.

It will be a long row to hoe, and I knew it coming into it. However, being laid up and utterly crippled like this has been frustrating, if not just simply disheartening at times. I don't take for granted just how well I used to get around despite the obvious limping.

I was angry when I saw the Greencastle Fire Department's post on Facebook about the recent house fire over in Clinton Township. It was that sense of duty, that very present sense of needing and wanting to be there. I seethed because the story had already been told. My honest question is whether there was a point in us reporting that it happened.

I have started to personally challenge that commitment. I have begun to confront my values and self-worth, as well as think about who and what should matter most to me. In turn, it's also about seriously thinking about who would or has been in my corner. Not all of it has been critical, though. I've not given grace like I should to a few people.

What this may be about is looking after myself and my well-being. But as I continue to heal, I hope those in my corner, and everyone who supports our work at the Banner Graphic, can show us that we matter. If anything, that is what will drive me forward.

This post was published in the Tuesday, Feb. 8, 2022 edition of the Banner Graphic.