Royce Waltman someone to celebrate 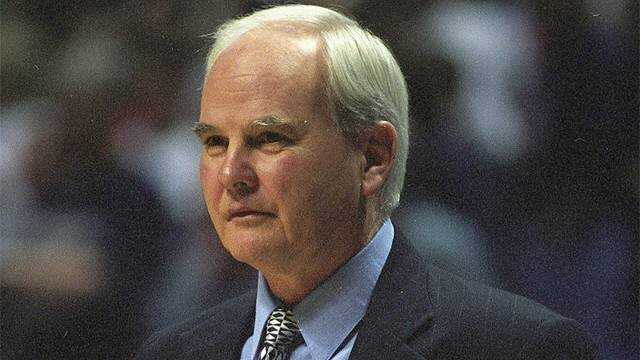 With the passing of former DePauw University basketball coach Royce Waltman Monday night -- a feisty fellow and architect of a 1990 NCAA title run that came up one last shot or one fateful missed call short of reality -- I was deep in my own thoughts and memories when I spotted a tweet from Ken Owen.

In less than the Twitter-restricted 140 characters, Owen, the personable DePauw media relations director, had captured exactly what I was thinking with his tweet: "Somewhere in heaven, Royce Waltman is arguing 'Brad Brownell was fouled' -- 1990 D3 final game."

My enduring memory of Royce is of him sprinting clear across the court that day at Wittenberg University, his characteristic gold sports jacket fanning out behind him as he went, arms outstretched and whirling like a dervish, desperately seeking out someone, anyone to call a foul on Rochester and reverse the painful 43-42 Division III title game outcome.

Picture Jim Valvano running all over the court, looking for someone to hug when N.C. State won the 1983 title. It was that kind of moment in reverse.

About 90 minutes after the Tigers' loss, the DePauw Booster Club -- its membership swelled as the byproduct of bandwagon jumpers and the presence of two home-grown products (Moose Hecko of Greencastle and Troy Greenlee of South Putnam) -- convened in the ballroom of the Springfield, Ohio, hotel we all shared that weekend. The mission was to drown our sorrows and relive the incredible journey of that 1989-90 season.

But feisty ol' Royce was having none of it.

He stood in the center of that room and told one and all that he and the Tigers had come there to win and nothing else mattered. They didn't come to get second place. And because of that, there was really nothing to celebrate.

And while that may have been momentarily true, after 24 hours to dissect and digest the circumstances, I couldn't help but write a column about how Royce was simply wrong.

Indeed there was plenty to celebrate in a season that not only galvanized the community but made local heroes not just of Hecko and Greenlee but Bret Crist and Brad Brownell and a handful of others.

Our Monday afternoon newspaper had only hit the streets about an hour or so before I heard a page for me come over the Banner Graphic intercom: "Eric ... Royce Waltman on line 3."

Now I've dealt with my share of angry, losing coaches. Had a Missouri football coach call my dorm room late one night, upset with a story he didn't like. Stared into the eyes of an angry Bob Knight more than once in Bloomington.

And Royce Waltman certainly could be aggressive like that. I wondered if I had poked the bear perhaps a little too much.

Yet when I answered the call, Waltman was thoughtful, thankful and apologetic. I was right, he said upon further review, indeed there was plenty to celebrate. After all, not only can just one team win the national title, but only one gets to be runner-up.

But now, nearly a quarter-century later, I realize I was wrong.

Royce Waltman absolutely came here to win. He won on the court and he won in life.

And those who got to know him are better people because of it. To say he will be missed is too much of a cliché.

Today I'm calling a foul on heaven. Give us one more chance to change the outcome. That would only be fair ...