I never thought I'd say this 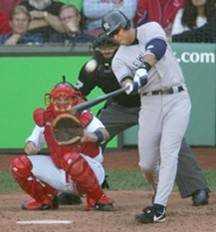 Here's hoping we see this about 300 more times.

(By the way, I know my name's spelled wrong. I have no control over that. It will be fixed soom.)

I'd like to tell you to take note because I'm not saying it again. Unfortunately, that is not the case.

Now make no mistakes here -- I am neither a fan of Mr. Alex Rodriguez nor of the New York Yankees. I'm still pretty much a hater on both fronts.

I mean, my history of disliking A-Rod is deep, but it can all be summed up with the "slap play" in the 2004 ALCS. That was the most Bush League thing I have ever seen. That cemented A-Rod in my personal hall of shame.

It's just that my hand has been forced by Barry Bonds. Barring major injury in the next day or two, he is going the be the all-time home run king.

Bonds' late-in-life "growth spurt" is a little too much to take. I'm sorry, that ain't natural.

As Stuart Mackenzie (the dad in "So I Married an Axe Murderer") once said, "Look at the size of that boy's head!"

But enough about Bonds. That has been argued to death. My problem is this -- I don't want a (likely) juicer to hold the most important record in sports. And whatever Jose Canseco says, A-Rod is no juicer. I feel certain of that.

When it gets down to it, there are two main reasons I'd much rather see A-Rod with the record than Bonds.

2.) He's more or less likable. He seems to respect the fans, the media and the game, three things I can't say about Barry.

So, I guess that does it. Based on the current pace, that means I have to cheer for Rodriguez for about 5 or 6 more years. Even if his pace falls off in his late 30s (which generally happens to players who aren't "chemically enhanced") I'm looking at maybe 7 or 8 years. I can handle that.

So, here's my message to A-Rod: "Keep it up, my good man. I'll be around cheering as loud as anyone when the record falls in 2013."