This could ruin me 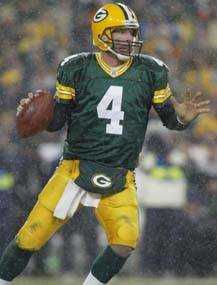 Will Brett give me reason to cheer this fall? I certainly hope so.

I was told recently that I was the only sports editor on earth who has never played fantasy football. I can live with that.

I'm not sure I have an explanation for this, except that I've spent most of my adult life working second shift. Because of this, interaction with normal people has been limited. When someone has asked if I wanted to play fantasy football, I was normally open to the idea. Then they'd say they were having their draft at 8 p.m. Wednesday.

Oh, thanks, genius. I really wanted you to remind me that I'm hard at work while you have free time.

This year I'm making up for it. I'm in two leagues. I think that's a good thing, but I'm worried how it will affect me as a fan.

The first league I joined had an online draft. My wonderful friends decided 7 p.m. on a Friday would be a great time for a draft. It would be, except that I tend to be at REAL football games at 7 o'clock Friday night. Thanks for being considerate of the guy who actually has a professional tie to sports.

So, anyway, my automated draft chose two quarterbacks for me -- Brett Favre and Ben Roethlisberger. Ironically, these are the QBs of my two favorite teams.

Unfortunately, I also understand the limitations of my two favorites. While I think both are great leaders, Favre is not a great stat guy at this stage in his career and Roethlisberger has never been a great stat guy. He's at his best when the Steelers are running a lot.

Bottom line, these two could be great fantasy busts.

So this is a good beginning. I'm already bitter at my two favorite teams.

Add to this that I have the New England defense. I think this was a good choice. They are one of the best defenses in the league. The problem is, I HATE THE NEW ENGLAND PATRIOTS! What am I supposed to do? Cheer for a bunch of smug, dirty, no-good swine just because they represent me in cyberspace? (At least one of whom is a juicer -- I'm looking at you, Rodney Harrison.) It's a tough sell.

My second league is going better. First of all, we had a live draft. I much prefer the chance to open the season by mocking my competitors to their faces.

Even more importantly, I got the first pick in the draft, so LaDainian Tomlinson is mine. It's a good place to start, anyway.

More importantly, I intentionally avoided players and teams with which I have any serious emotional attachment, positive or negative. I can live with cheering for the Chargers or Saints or Lions or Giants, but I won't be totally broken if they lose.

I guess this will be a great experiment. If by December I'm blogging about how much I hate football, you'll know it's failed.

This could just add to the list of reasons I hate computers.