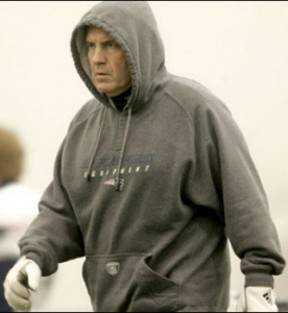 String him up by the hoody. See if anyone else tries to follow suit.

(Thanks to Judge Smails for one of the most quotable lines in my repertoire.)

So here's something that is a newsflash to no one -- Bill Belichick is not very nice.

We all know the guy has less personality than a fencepost. He has the sense of style of a homeless wino. He is one of the most successful coaches in the history of the NFL and yet he seems to take absolutely no joy in it.

But a cheater? That was an accusation I didn't think I'd hear.

Yes, folks, it appears that way. NFL insiders seemed to take it as no real surprise when a camera was confiscated from one of the Patriots' assistants during Sunday's 38-14 win over the Jets.

For me, though, it was a little shocking. I've thought all along Belichick's a jerk, but I also thought he had respect for the game. This seems to be one of those guys to whom nothing else matters so much as the almighty football. Sleep at the office, ignore your family. Do what it takes to win, win, win.

But the flip side of that (or so I thought), was a belief in the game, a respect for its past, an attempt to preserve the integrity of competition.

But maybe I should have seen the warning signs.

Most of the things the fans and media have disliked Bill for are harmless. But what about he and the Patriots' treatment of former Pats linebacker Ted Johnson? Johnson's accusations that he was pressured to come back too soon from concussions are nothing to ignore, especially when you consider that the man has now lost some of the basic motor functions of everyday life.

Belichick and the Patriots turned a cold shoulder to a man who sacrificed the very function of his body for the franchise.

Then you consider the recent revelation that Rodney Harrison, a lynch pin of the Patriots' feared defense has used human growth hormone. Now we all knew Harrison and much of that defense was dirty in between the lines, but being dirty outside the lines is something else entirely. How many juicers do the Pats have on the team?

Belichick is known to micromanage every detail of the Patriots. Do you think he was totally ignorant of this?

And now this. We thought the Pats were just better prepared and more dedicated than most of their opponents. Turns out, they may have been illegally obtaining an edge all along.

Strike three, Billy. You're out.

So now the test is for NFL Commissioner Roger Goodell. He's shown himself to be tough on the criminal players who have messed up the league's image. He's done a good job with that, and any fan should applaud it.

But this isn't image. This is the league's very integrity. It's time for Goodell to come down hard on Belichick and the Pats. There's been talk of taking away draft picks, and that's great. However, I think there should be some immediate repercussions, and I'm not talking about these meaningless fines. The league's fines are like parking tickets to you or me. Sure, it's a pain. But I'll probably try to get away with it again.

Belichick either needs to be suspended (I'm talking barred from game and practice facilities for an extended period of time.) or the win needs to be stripped.

Sure it's extreme, but I also think it would take care of the problem right now. They say this may be more widespread than any of us think. So be it. Make the Pats an example and it will end now.

No one else will be trying this stuff anymore.