THE WORST DECISION IN THE HISTORY OF COACHING 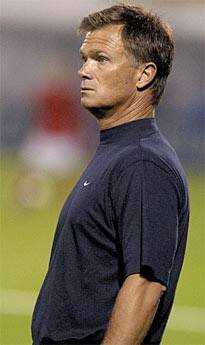 Before I begin, a disclaimer: I know very little about soccer -- at least when compared to football, baseball and basketball, the sports I cut my teeth on.

With that said, let me now say, United States Women's Soccer Coach Greg Ryan made the single worst decision in the history of organized sports this week.

He did so when he named Briana Scurry the starting goaltender over Hope Solo for this morning's World Cup Semifinal against Brazil.

Team USA paid for it with an embarrassing 4-0 defeat at the hands of the Brazilians.

The record shows Scurry has had a fine career, but Solo was hot. She had not allowed a goal in three games.

Many of you, like me, are probably not overly familiar with soccer, so let me break it down. In soccer, the goalie is the quarterback, the point guard or maybe the pitcher and catcher all rolled into one.

No other player on the field makes so much of a difference as the goalie. When she's hot, you don't pull her. THAT'S THE WAY IT IS. Even the untrained observer could tell you that.

But Ryan said Scurry had a good record against Brazil, and thought she would be the right choice. Problem is, Solo was hot and Scurry is probably past her prime. (At least she looked that way on Thursday.)

I've tried all day to think of an analogy for this, but there is none I can think of. That's how monumentally bad this was. Nothing I can think of can even approach this.

Here's the best fictional analogy I could come up with. Think back to the Colts' playoff run last year. In the week leading up to the AFC Championship game, Tony Dungy calls a press conference to announce a change in quarterbacks.

"I know Peyton is probably the best quarterback in the game right now, and he's been playing very well for us," Dungy would have said. "But we've decided to start Jim Harbaugh this weekend because he did pretty well for us back in '95."

Anyone ready to face the Patriots after that decision? I didn't think so.