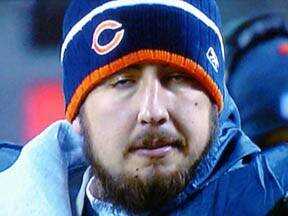 A face that should instill confidence in every Bears fan.

This just in -- Brian Griese may be even worse than Rex Grossman.

Everyone who has even a remote interest in the Bears has been calling for Grossman's head for about a year now. (It should come as no surprise to hear Chicago fans complaining. They are apparently all masochists in the Second City or else they would have run the Cubs out of town decades ago.)

Finally, coach Lovie Smith gave in to the grumblings following Grossman's 15-of-32, three interception performance last week, a game in which the Bears were destroyed by the Cowboys 34-10.

Enter the wonderboy Brian Griese, who wowed us all by going 34-for-52 for 286 yards, no touchdowns and three interceptions.

This guy was supposed to be a game manager, not a gunslinger. No game manager throws 52 times and survives to tell the story.

So let's compare notes. Rex Grossman had a 45.2 quarterback rating in three games. Griese, on the other hand, had a monumental 68.3. (Perfect is 158.3. Stupid, I know.) This guy's setting the league on fire.

The problem everyone had with Grossman was that he was a risk-reward kind of guy. He took a lot of chances, but when he was good, he was really good. It's just that the good came so rarely.

What does that make Griese? A risk-risk guy? He has all the interceptions of Grossman, but none of the arm strength.

Some of these fools on TV said Griese could save the Bears' season.

It's been a long time since Griese's Pro Bowl season in 1999. It's been even longer since his national championship at Michigan.

Why not start Purdue grad Kyle Orton? Could things get worse for the Bears?

And besides, Orton was dynamite in 2005. Sure, his stats were bad (59.7 QB rating), but the Bears stuck by Grossman when the team was winning in spite of him. Orton's even better on that front, going 10-5 as a starter with an eight-game win streak. Who cares about the 9-to-13 touchdown-to-interception ratio?

I also love seeing Orton on the sidelines with his hippy look. The hair gets longer and dirtier every week. Why not see that mess sticking out from under a helmet?

It is the Bears' only hope.

(On second thought, I'm a Packers fan. Just go back to Grossman.)