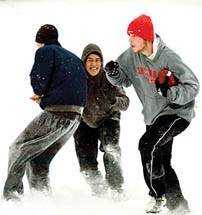 As it should be.

But here's the thing: I never really believe it's football season until the air has the proper chill in to it.

Oh, sure, we're about the play the final games of the regular season. County teams have played in a combined 27 contests, and I've even been to seven of them myself. I've enjoyed every bit of it, but it hasn't really been football season to me yet.

But really, football season begins in my mind the first time I feel a chill that tells me I should have donned some long sleeves that morning. I got that feeling on Wednesday.

That's also the feeling I remember getting as I exited the locker room at Seeger High School to feel a stiff wind blowing across the western Indiana prairie.

This is the weather in which football was meant to be played. I know the hot weather of two-a-days and the early games is supposed to prepare young men for when real gut-check time comes in October, but didn't that linger a little long this year? I was sweating at last week's game, and it was Oct. 5.

So far this year, I've had one half of football -- the second half of Cloverdale's win over Cascade -- in which I even felt proper fall weather. I loved that half, and I'm going to love this Friday.

I guess I don't know who this complaint is really directed at. It's not the IHSAA's fault that summer has lingered too long. It's not the players' or coaches' faults. I'm certainly not going to get into trying to blame God. I don't play that game, nor should any of us.

I guess I just feel bad for the kids this season. My favorite memories of high school football (And believe me, my career as a backup left guard was never highlight reel stuff.) are of the calm chill before the game, and then the way it all went away after that first hit. It didn't matter how cold it was, how much you could see your breath or how many layers of clothing the fans were wearing. It was fun to know you were oblivious to conditions that were driving everyone in the stands absolutely crazy.

It's unfortunate that half the teams in this state will have only two weeks of that this year.