Where have you gone, Honor? 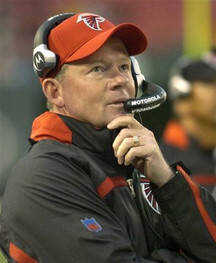 I wonder if my next stop can be the CFL?

Just after Bobby Petrino spent his Tuesday resigning from the Atlanta Falcons after only 13 games at the helm and then taking the job at Arkansas later in the day, someone else resigned from the big-time coaching ranks.

His name was Honor.

Honor has been a big name in coaching for a long time. He was right there with the likes of Vince Lombardi, Tom Landry, Bear Bryant and Eddie Robinson.

Honor still has his hangers-on, like Joe Paterno and Les Miles (I think and hope.).

But Honor said he'd had enough after Petrino told Falcons owner he was staying as the coach just one short day before resigning.

Honor has taken his share of hits in recent years. He's stood idly by as money interests (and nothing else, really) have allowed an outdated and ridiculous system determine the champion of major college football.

There have been those individuals who will boldly lie to everyone around them about their intentions, only to cut and run when things get tough. The likes of Petrino and new rival Nick Saban have left several college and pro programs in shambles as they ran to get out of town ahead of the coming mob.

But Honor said his biggest problem with the college and professional football is the way players are treated like pieces of property, while coaches can come and go as they please. They tell the players to stick it out, play all four quarters and try to build some character.

Unfortunately, too many of the coaches aren't listening to themselves.

In leaving, Honor called on us all, not just the coaches, to bring some respectability back into the profession. It's up to the coaches to stick it out when things are tough. It's up to athletic directors, owners and general managers not to get rid of the coach at the first sign of trouble.

And it's even up to you and me. Yes, the media and fans need to part with our 'off with their heads' mentality at the end of each season. We don't need to call for blood; we need to stand behind our teams. Continuity is the biggest key to building a winner, anyway.

It was, after all, pressure from crazy fans that led former Arkansas coach Houston Nutt to resign just days after upsetting the number one team in the country. The poor sap couldn't win.

Honor hopes to find a new home somewhere in the "lower" coaching ranks. He is already well established in the world of small college and high school football. He also always has a home in peewee leagues.

He'll probably be much happier there.