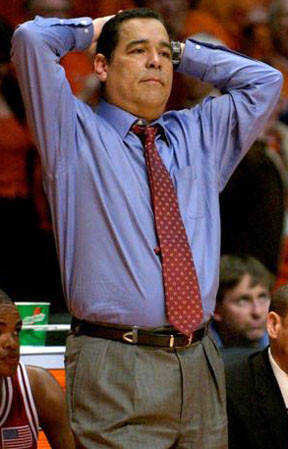 Maybe Kelvin should get a Tracfone...

With the New Year just around the corner, the time has come for us to all make our New Year's resolutions. Now, no one needs to take this too seriously because we all know they'll be broken anyway. But just the same, I thought it might be helpful to make some suggest some resolutions for some of our favorite and not so favorite sports figures.

We'll start right here in our lovely home state and then move on down the line.

Jamal Tinsley -- Stay away from strippers and guns.

Marvin Harrison -- Get a new team physician. They've been saying you were ready to go since the New England game, yet you haven't seen the field yet.

Bill Lynch -- If Cam Cameron or Gerry DiNardo calls with advice, DO THE OPPOSITE!

Kelvin Sampson -- Stay off the phone.

And now we'll expand the focus a little bit.

The University of Kentucky -- Find out what Tubby Smith's doing these days.

George Mitchell -- Be sure you can prove accusations before you make them.

A-Rod -- Get an agent with a better sense of timing.

Terrell Owens -- Whatever resolution you made last year, make the same one again this time.

Bill Parcells -- Get a quarterback someone has heard of and fire the aforementioned Cameron.

David Stern -- Concentrate on ridding your game of gambling scandals, not on dress codes and basketballs made of space-age polymers.

Bud Selig -- Admit you were part of the problem and then choose to move forward.

Isiah Thomas -- Look into becoming the head coach for the Argentine Olympic team. That way, the U.S. will be a lock for the '08 gold medal.

Stephon Marbury -- Concentrate more on producing low-cost athletic shoes and less on being an all-out jerk.

Ricky Williams -- Why don't you make the same resolution you've been making for the last eight years? It always goes up in smoke anyway.

Bobby Petrino, Nick Saban and Rich Rodriguez -- Try to be holding down the same job in January 2009 that you have in January 2008.

With those out of the way, I'll move on to myself. I'm resolving what I always do: to lose weight and to proofraed bettter.