Some words can't be taken back 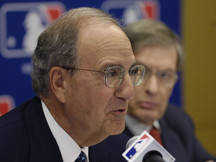 I suppose it's time to talk about this. However, I don't really want to so I'll keep it brief.

Did Roger Clemens use the juice? Probably.

But that's just it. "Probably" or "probably not" or "maybe" or "I'm not sure" is all anybody can say. Maybe he did it and maybe he didn't. I think the guy's an arrogant jerk and the last couple of weeks have done nothing to change that opinion. But that's no reason to drag his name through the mud for no good reason.

But we still don't know for sure that he ever used any performance enhancing drugs.

So the real problem I have in this whole issue is with George Mitchell. I think what the man set out to do was a good thing. But then he screwed it up.

He didn't have what a court of law would consider "proof." He had "hearsay." Hearsay doesn't stand for much in a real court.

When the coverage of the report came out, it made me sick because the naming of names did no one any good. I said it would lead to a ridiculous number of lawsuits.

Are years of litigation and counter-litigation good for the game? I don't think so.

And yet the Clemens case seems to indicate that's what we are going to get.

I will say this: If Clemens used steroids or human growth hormone, I hope he gets caught. I hope we find out every shred of truth and that we forget about his records and awards. (Actually taking them away is ridiculous and futile, though.) I hope he never makes the Hall of Fame if we find out for sure he did it.

But I don't think we'll ever find out for sure, one way or the other. I don't think the evidence exists for either case. All we have is Brian McNamee saying one thing and Roger Clemens saying another. All we know for sure is that least one of them is a liar.

What really bothers me, though, is that this may not be true. But the Mitchell Report can't be taken back. Right or wrong, Clemens' name is now forever linked to performance-enhancing drugs.

As Americans we believe you are innocent until proven guilty. Unfortunately, Clemens won't enjoy that luxury when it comes time to vote for the Baseball Hall of Fame.

Even more shocking to me is that the Clemens issue has changed my thinking on Barry Bonds and plenty of other would-be Hall of Famers who may or may not have used steroids or HGH. Until it is proven for sure that they used these substances, the baseball writers have a responsibility to vote for them.

I would hate to see even one falsely accused player denied the honor he worked and sweated and bled for so long to attain.