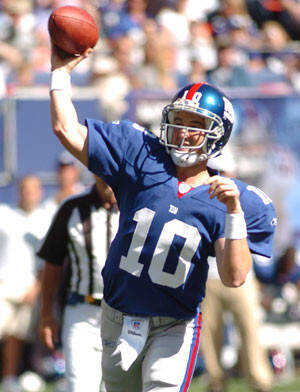 Are you afraid of this man? I am now.

First of all, let me please extend my condolences to all of the Colts fans who might read this. I mean that. It's also deeply disturbing to me that the only thing standing between the Patriots and a Super Bowl berth is a team whose top three offensive threats are all currently "questionable" for the AFC championship game. It makes me want to vomit, honestly.

Now, why, you might ask, would I whine about a team who is about to host its first NFC championship game in 10 years? It's because I don't believe they're any good. My team is average at best and they have been overachieving all year long.

They're sure to be exposed next week.

(Okay, fine. They might be pretty good, but I'm not going to say that outside of parentheses, because that would be admitting that I actually believed it.)

And admitting it would be like kissing the season and a Super Bowl appearance goodbye.

You see, I've spent all season believing the Packers weren't very good, and it has served me wonderfully. Incidentally, the only two games I've felt supremely confident entering were the two Bears games, and those were both ridiculous losses. (freakin' Bears)

That means the Packers are an outstanding 14-1 in games in which I thought, "I'm not sure about the Pack this week."

(By the way, that other loss was to the Cowboys, who the Giants beat Sunday afternoon. YEAH, BABY!)

But, I'll say it again, "I'm not so sure about the Pack this week." (Wink, wink.) Seriously, the Giants are now 9-1 on the road this season. You think Lambeau Field scares them? Think again.

Never mind that the Packers won 35-13 in week two at Giant Stadium. That was week two. And besides, we all know the Giants suck at home. (Maybe that's because it's not really home. Why the heck do the New York Giants and New York Jets play their home games in New Jersey? But that's a rant for another time.)

So it's settled. Past performance doesn't matter. The Packers are doomed.

Giants fans might as well pack two suitcases -- one for Green Bay and one for Glendale. Just don't get the Wisconsin bag mixed up with the Arizona bag. That would be a disaster.

(But we all know what I really think. But, SHH! Don't tell the football gods. I still have them fooled, as long as they don't read in the parentheses.)