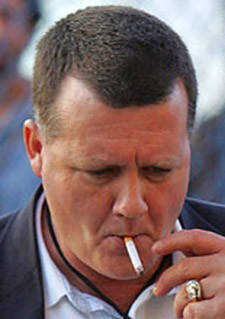 At least when he's taking a drag he can't say something stupid.

First, a disclaimer. I am not a Red Sox fan. I dislike the Red Sox and Yankees equally. As a Tigers' fan, I can't, with clear conscience, throw myself behind either one.

I am also tire of those two being the only story ESPN wants to talk about when it comes to baseball.

But that being said, what happened to actually having to do something for yourself before being someone who matters in the national media? I'm talking about Hank Steinbrenner, who only matters because his daddy rebuilt the biggest franchise in American sports.

But what has Little Henry done? Besides spending most of his life at the horse track, not much.

In the baseball world, he has basically only spent the last couple of weeks making a nuisance of himself.

First, there was his problem with baseball being "singled out" when it comes to the steroids issue.

Hello? The NFL doesn't have a steroid problem on par with MLB because football chose to deal with it two decades ago! Baseball has a problem because the people in charge (George Steinbrenner included) chose to do nothing about it for many years.

And then he talked about how new manager Joe Girardi has "a little more fire in his belly" than former Yankee and current Dodger skipper Joe Torre.

Hank really needs to shut up on this one. Maybe the Yanks haven't won a championship since 2000, but Daddy's team wouldn't have won its last four championships without Mr. Torre. Show the proper respect, please.

And finally, he gave this little gem about the arch rival "Sawx" and their fans.

Red Sox Nation? What a bunch of [expletive] that is. That was a creation of the Red Sox and ESPN, which is filled with Red Sox fans. Go anywhere in America and you won't see Red Sox hats and jackets, you'll see Yankee hats and jackets. This is a Yankee country. We're going to put the Yankees back on top and restore the universe to order.

Look, without the Red Sox success over the last several years, the Yankees also wouldn't get the coverage they get. They've been good but far from great over the last five years or so.

However, the boys in pinstripes remain relevant because they have been on the underside of the best rivalry in sports for the last few years. Without the Boston rivalry and all that pomp, they'd be about as big a deal as the Angels or White Sox.

So, Hank, the lesson is--shut up until a team under your watch has done something worthwhile. Daddy's money bought the team and his drive rebuilt it into a major power, so he had the right to run his mouth.

You are just a child of privilege who was in the right place at the right time.