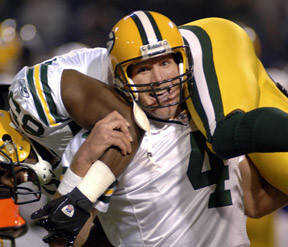 My childhood is now over.

I know, I'm 27 years old, balding and long-since out of shape, so my childhood should have been over years ago. But like many young boys, my childhood heroes were always sports figures and as long as one of those was still hanging around, I was still a child.

At my house, there were three revered above all others: Bobby Knight, Dale Earnhardt and Brett Favre.

For Bobby, the infatuation was over when he was let go at Indiana. I'm not trying to get into the argument over whether his firing was justified or not. The fact was, though, he had always coached my favorite team and was one of the icons of my home state. Texas Tech never meant too much to me.

And then there was Earnhardt. That was just a case of gone too soon. Honestly, I was never as big of a NASCAR fan as the rest of my family, but that was a figure who always meant a lot to me.

But for the past six or seven years, my childhood would always come back in the early fall when the Packers took the field.

You see, Favre had been there as long as I can remember. I started to really care about the NFL at about 12 years old. That was 1993, just about the time that Mike Holmgren and a young man from Mississippi started to take Titletown out of its dark ages.

There have been bumps in the road, but it has basically been success ever since.

There were the years of building and trying to get around the evil Cowboys and 49ers.

There was the Super Bowl championship, and seeing Brett run down the field like the excited young man that he was.

There were three straight MVP awards, something never done before or since.

There was the amazing game against the Raiders right after Brett's father died. I don't know if I've ever been more moved by something I saw in a sporting event.

Perhaps he played like a 12-year-old linebacker. It was that combination of competitive drive and childlike enthusiasm to be professionally playing a game.

And that's what it all comes back to for me. At the end of the day, it was only a game to Favre. Sure, he wanted to win more than most. He cited the unlikelihood of winning another Super Bowl as being a chief reason for his decision.

But it never stopped being fun for him. He knew it was big business, but it never was to him. That was always refreshing and it will truly be missed.