My own madness begins? Perhaps... 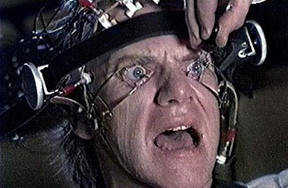 Maybe it is possible to see too much.

As I write this, the NCAA Tournament has been a mild disappointment. Eight games are complete and none of these have been upsets.

Honestly, none have even been overly close. The best game has been Marquette's eight-point win over Kentucky. But of course, our local CBS affiliates didn't carry that one.

I think I've solved that problem, though. As I sit here at my desk, I can watch the USC/Kansas State game on the TV on the wall. I can look at the screen on which I'm currently typing this and see the Washington State/Winthrop game. I can also look to my left and see the Duke/Belmont game playing on Caine's computer. (Go Belmont!)

Best of all, this behavior is not frowned upon by my superiors. It seems keeping up on the latest in sports is part of my job description.

This appears to me to be another example of me cheating the system, though. It's a concept I'm not unfamiliar with. In college, I was a literature major. While I believe I worked just as hard as any of my peers who studied, say, business or biology, I feel like I got a lot more entertainment out of the process.

For four years, I read novels and poetry, and I did so well at it that they gave me a diploma. Seems a little like a scam to me, but I'll take it.

Fast forward five years and I'm a sports editor. Sure, I don't make as much money as my old classmates who work for Eli Lilly, but we all have to make our choices. I chose to do something I love and get paid for it. The fact that I don't get paid large sums seems to me just one of the tradeoffs.

A Chicago outplacement firm has estimated that March Madness will cost employers more that $1.7 billion in lost productivity this year. As I sports writer, I'd like to think that my viewership actually works against those numbers.

Not everyone would see it my way, though.

But back to the basketball. My one worry in all this is a case of sensory overload. Granted, I still have to perform my typical job duties, so I can't devote every bit of attention to basketball.

However, even when I am giving my attention to basketball, I don't know where to look. I just figured out that late in the first half, Belmont is still hanging with Duke. That is both unexpected and awesome, but I'm also unhappy that I hadn't noticed sooner.

The sum of all this information before me could be me absorbing absolutely none of it.

That would be just tragic.

And even if none of the games are upsets, do I really care? Only a little bit. One day of this tournament, with or without Cinderella and her buzzer-beaters, is better than a day without it.