A blind pig finds an acorn? 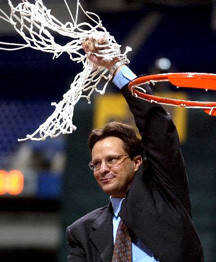 Lead me to the Promised Land, Tom.

First of all, let me point out how much I hate that phrase. I understand what it means, but I raised pigs for ten years and never knew them to have much appetite for acorns. They seemed to like corn, other grains, table scraps and even beer (please don't ask), but I never saw them eating acorns. Why not a blind squirrel? Why wouldn't the pig be looking for a truffle? But I digress...

In this case, I hope our beloved blind pig in Bloomington found its acorn.

I'd really like to say Indiana University got it right. I think they did, finally.

Nobody will actually believe this, but when IU hired Kelvin Sampson in 2006, new coach Tom Crean, along with Bruce Pearl, was one of two relatively young coaches I wanted them to take a look at.

(It's kind of like the guy who swears he had all the right Final Four teams in the first bracket he filled out. But I swear this one's true.)

But here's my problem--when was the last time IU handled anything right as it pertained to the basketball program?

Bob Knight may or may not have deserved to be fired; I won't go there, either way. But it was the way he was fired that was so ridiculous. The so-called "zero tolerance" policy was not enacted until what good ol' Miles Brand termed a series of events had taken place.

Now which was it, Miles? "Zero tolerance" can't be invoked after a series of events. It's one or the other.

And then they let the inmates run the asylum. With players threatening to leave if Mike Davis or John Treloar wasn't made coach, the administration sacrificed the long-term interests of the program to keep a group of underachieving players right where they were. The University relented and made Davis coach.

But in spite of a run to the final game in 2002, things soon soured with Davis, and the Hoosiers were looking again in 2006. That's when we got the beloved Kelvin, too many phone calls, sanctions and all.

Thank you, Kelvin, and thank you, Rick Greenspan. It's unfortunate that one of you still has your job.

So as I sit her tonight, I want to say Crean is the right choice. In my heart, I believe he is.

He took Marquette to the Final Four for the first time since the Al McGuire era. People want to give that credit to Dwyane Wade, but who got Wade to go to Marquette, anyway?

Then when Marquette jumped from C-USA to the Big East, they remained a factor in the best basketball conference in America.

The guy can recruit. The guy can coach. The guy is charismatic. He needs to be all three.

But I've learned over the past several years never to give the IU administration too much credit. I just hope they didn't mess this up again.

(But then again, maybe I just love the guy because he wears glasses. He gives dorks like me a feeling of credibility in the sports world.)