If the coozie fits... 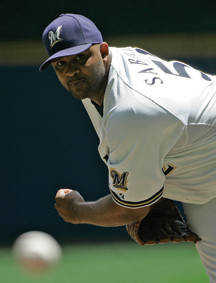 CC sabathia and beer. A match made in Milwaukee.

I'm a lifelong Reds fan, and with that in mind, it's not right for me to cheer for another team in the division. For that reason, I absolutely hate the Cardinals and can only cheer for those hard-luck Cubs under my breath and after the Reds are out of contention. (But that's usually pretty early in year, anymore.)

But with the Brewers recent acquisition of CC Sabathia, I may have to choose another unofficial favorite. You see, with Sabathia, two of the Brewers biggest stars are my favorite sort of baseball player -- fat guys.

I guess the best part of all this is, the team named for beer has two of the most notable chubby guys in baseball with Sabathia and Prince Fielder. It could only be more fitting if they played for a team called the Candied Hams.

I'm not sure why I'm so fond of the overweight players, but I think it has something to do with the belief that if these guys can do it, maybe I could.

Which I couldn't. Trust me.

But when I see Sabathia striking out some the game's best or Fielder leading the league in home runs, I see a bit of myself. I'm a bit chubby myself, and these guys make it seem like it's okay.

Of course, maybe I'm just looking for something to blame my own weight on besides my poor eating habits and general laziness.

But whatever. Thinking about this duo got me thinking about my favorite fat ball players of all time. So here they are, a mix of current and past players who make fat kids like myself feel better about ourselves.

10. Pete Incaviglia Pete played outfield, which is impressive for a chubby man. But I once saw him jump to try and rob a home run in left field during a Phillies game. He got to the wall in time and then made his jump, and I kid you not, the guy must have had a 4-inch vertical. It was one of the saddest displays of athleticism I've ever seen.

9. David Wells What can you say about Wells? His mouth is probably the only part of his body more entertaining than his belly. He's also one of the most underrated hurlers of the past 20 years.

7. Dmitri Young Makes the list because he has formerly played for the Reds and Tigers, my two favorite teams. Actually, "Da Meat Hook" was discovered to be diabetic earlier this year. Maybe I should stop joking about his weight.

6. David Ortiz He's one of the most beloved players in the game right now. But is it all those clutch RBIs or how festively plump he is? It's the weight. How else could an airport full of Japanese people mistake a fat white dude for him?

5. Tony Gwynn The best part about Gwynn is that tiny voice coming out of that rotund man. I guess he was a pretty good hitter, too.

4. Fernando Valenzuela For a time in the '80s, Fernado made it chic to be the most grotesque man in professional sports. He wasn't just fat, he was fat and dirty with that certain pizzazz.

3. Cecil Fielder The father of the aforementioned Prince, Cecil occupies a much higher spot on this list because he played for my beloved Tigers. It's my list and I can do that, I guess. But for about a five year stretch, he was one of the best power hitter in the bigs. And I'm pretty sure that bulk was all-natural. No roids here.

2. Kirby Puckett I'll tread lightly here, given Kirby's untimely demise. I just never understood how a man who was essentially round was also one of the top centerfielders in the league.

1. Babe Ruth Could it be anyone else? The man has inspired generations of portly baseballers. He was probably the greatest player of all time and in no picture I've seen did he look remotely "athletic."