The LONG road back 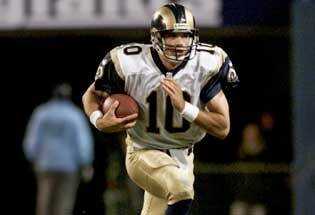 Fresh off a year in which he had thrown for nearly 3,500 yards and 23 touchdowns for the Redskins, he had signed a four-year $16.5 million contract with the Rams. Beginning the seventh year of his NFL career, Green was a well-paid NFL starting quarterback.

And then Rodney Harrison struck. (Yes, he was dirty even when he was 20-something and played for the Chargers.) The safety hit Green and ended his season.

You all know the story from there. Grocery bagger/Arena League QB/unknown backup Kurt Warner came in and set the league on fire. Warner went on to lead the Rams to the Super Bowl XXXIV championship (In what I believe was the most exciting Super Bowl game of my lifetime, but that's another story.) and pick up the next two NFL MVP trophies.

The bottom line was, Green wasn't getting the Rams QB job back.

But let's fast forward nine years. Never mind the 1,950 completions Green has had since then. Forget the 139 touchdowns, 97 interceptions and 24,509 yards he has compiled in that time.

None of that really matters. Instead, I'd like to look at it as if the last nine years and a month have been an extended quest to regain the Rams' starting job.

You see, on Tuesday the Rams decided to bench starter Marc Bulger, and who should be second on the depth chart but 38-year-old Green? Sure, he may be a little long in the tooth. A guy who has been knocked out of the last two seasons with concussions and is in his 16th year in the league probably isn't ideal for the Rams.

But neither is being 0-3 and looking like one of the worst teams in the history of organized professional football. (Unfortunately for us all, they don't play Green's old team and cross-state rival Kansas City. If those two played, we might be able to settle that title.)

Bulger has been awful this year, so why not go to Green? Maybe it's destiny. This guy grew up in St. Louis, so maybe he was born to be the starter in that town. Mr. Harrison just got in destiny's way. (I'll bet that wasn't the first or last time he did that.)

What Trent Green's story tells us is when life gives you lemons, make lemonade.

Or maybe he's been making Scotch. What else takes nine years to get what you originally wanted?