Ryan Adams and the Cardinals let us down, easy 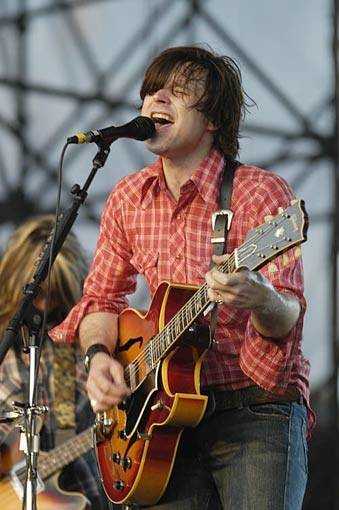 (A note to the reader: Now that I am a music critic as well as a sports writer, this blog is going to feature music reviews and my typical sports rantings. I may even experiment with blogs that meld the two. I figure the name still applies, though, as it's all still completely trivial. My apologies if you thought this column had something to do with your favorite National League Central team. Adams is not their latest free agent acquisition.)

Give this much to Ryan Adams: as a writer and musician, he is prolific.

Since his former alt-country band Whiskeytown released its debut album Faithless Street in 1996, Adams has averaged an album a year.

This has its good and bad points. It is nice to see someone called a "musical genius" by some actually producing music. Who needs another Axl Rose taking 14 years for one album?

The drawback is in consistency. How many good songs does even the best songwriter have per year?

If Cardinology, the latest album from Adams and the Cardinals is any indication, it's plenty of good songs, but fewer great ones.

Those familiar with Adams' previous work, whether with Whiskeytown, the Cardinals or solo, will recognize the vocals to be among his strongest. Adams' voice is indeed flawed, but that's the point. It's ideal for singing about heartbreak and longing.

That voice is in tune with the mood of the newest record. Adams knows the limits of his voice, and when he pushes it to or past those points, it is by design.

In "Natural Ghost," the singer says "You make me feel like I'm not here," in a strained, struggling falsetto. Then he reassures us "I am, more than you think I am" in his stronger natural tone. But on "Like Yesterday," Adams goes falsetto without strain, showing his true range.

The guitars of Adams and Neal Casal are solid and consistent, as is the rhythm work of Chris Feinstein (bass) and Brad Pemberton (drums).

The best work comes from the pedal steel of Jon Graboff. The instrument provides a tug back to Adams' country records and southern roots.

What Cardinology lacks is a standout. Listening to the 12 tracks, none disappoint, but none find the next level. Absent are gems like "New York, New York" or "The Hardest Part" or "Two" that provided the hooks of previous releases.

Instead, we simply have good songs. "Magick" is the album at its most rockin'. "Born into a Light" features some great vocal harmony. "Stop" is a sad piano ballad that is the perfect vehicle for Adams' plaintive voice.

But none excite. One could pick any other song and say something nice. It's full of nice album tracks.

So when Adams begs "Let Us Down Easy" on track six, it's more like the feeling of listeners. Adams and company have provided a slight letdown, but it's pleasant to listen to.

The album, like the songs, is good, not great. It is currently available both in stores and in mp3 form. With average album artwork and liner notes, the downloaded format more than suffices for casual fans.

For devotees, it is a good addition to the collection. Those unfamiliar with Adams should start elsewhere. Gold, Jacksonville City Nights or Whiskeytown's Stranger's Almanac are stronger introductions.

Cardinology, Ryan Adam and the Cardinals