You can keep the ugliness 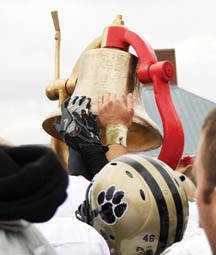 That bell makes a beautiful sound no matter who is ringing it.

(On the surface, this will look like another sports blog. I suppose it technically is, but I never promised I wouldn't blog about sports anymore. Besides, the adjustment will take time. Just be patient with me.)

On Saturday, I was able to exit the sports writing world in good fashion. My last duty as sports editor was to cover the 115th Monon Bell Classic.

For a writer covering sports in Putnam or Montgomery counties, it doesn't get bigger than that. The DePauw-Wabash football rivalry is the longest running west of the Allegheny Mountains and it's been a competitive rivalry throughout its history. With their win on Saturday, DePauw brought the series back to a tie at 53-53-9.

As some of you may know, I am a Wabash grad, so covering the game is both a treat for me and a bit of a conundrum considering that I cover it from the DePauw perspective.

But in the two years I've had the pleasure of covering the game, I've discovered that the rivalry is completely different for the people involved in the game professionally. If you approach it with your professional perspective, you don't get so wrapped up in the uglier side of things.

For the coaches and players on the field, there is obviously an element of bitterness toward the other side. That's what rivalries are all about. But at the same time, there is a lot of respect for the other side. On the list of the all-time winningest programs in Division III history, both schools are in the top 20. Both are also consistently fighting for the top spots in their respective conferences.

They may not like each other, but there is a certain understanding that when the game is over, it's settled for another year. No more discussion is needed.

And for people like me, it's a day that amazes us every year. How can these two tiny schools produce a rivalry more intense than anything we see in the Big 10 from week to week? How can so many people pack into this place that extra bleachers must be trucked in? How is the game so consistently exciting?

So, when on Saturday somebody said to me, "After this year, you can go back to just being a fan," I had to think twice about it.

Granted, it will be nice to just hang out with my old classmates just eating, having some drinks and remembering old times.

But then there's the ugly side of being a fan. There is no sportsmanship among fans at this game. Arguments and fights are bound to break out, especially have people have more drinks and become more willing to making horse's behinds of themselves.

It never really used to bother me, but after being able to hold it at arm's length for a couple of years, I decided it's not for me. But next November, I could be going back to that world.

It hit home for me after the game. I was wandering around the field among the celebrating DePauw players and fans, (A place I couldn't have imagined being a couple of years ago.) when some guys suddenly gets in my face. You see, I made a pick for The DePauw a few days before the game in which I picked Wabash to win by seven. It's genuinely what I thought would happen.

I just stared coldly back and said, "I will. It's handled."

I had the pleasure of working pretty closely with Matt Walker all season, and the fact that I picked Wabash to win the game was a non-issue. When I saw him before the game, we laughed about it and shook hands. When I saw him after the game, the same thing happened.

I appreciated that, and it reminded me that sports are just a litte more fun when you don't let rage and hatred become a part of your thinking.

Having a professional interest in the game tends to keep people thinking and acting like grownups about it all. It would be nice if that sort of thing would spread.

After all, as this blog used to remind us all, it is only a game.