The Killers keep us all guessing with Day & Age 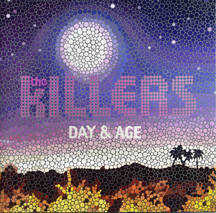 The landscape of Las Vegas may just be the least organic of any city on earth. Everything is lights, glitter and movement. There isn't a trace of anything naturally-occurring.

Most of all, the city is forever changing. Things are always new in Vegas. Even the classic hotels and casinos look nothing like they did 10 or 20 years ago.

From Sin City emerged the Killers in 2004 with their debut Hot Fuss, and they looked and sounded the part of the quintessential Vegas band. The music was a synth-infused rock that was entirely a product of the band's environment. Nothing, down to singer Brandon Flowers' voice sounded the way it would in nature.

Fast-forward to 2006 and Sam's Town, and the Killers moved to more of a traditional guitar-driven sound, particularly on the lead single "When You Were Young."

And now it's 2008, and they are on the move again. But this time they are occupying more of the middle ground. On Day & Age, released Nov. 24 on Island, the band is back to its synth tendencies (Even this non-dancer feels like moving to these beats), but guitar rock fans don't feel out of place.

But perhaps even more notable about the album is not only its movement as compared to the first two records, but also its movement within the record. We open with the horns of "Losing Touch," and then segue nicely into the electronic beats of "Human" and "Spaceman."

But in the next few tracks, the listener comfortably navigates a number of stylistic curves. Saxophone and a catchy Latin beat highlight "Joy Ride." "A Dustland Fairytale" starts as a quiet piano ballad before growing into a synthesizer-driven anthem. "This is Your Life" opens with African chants and something akin to a harpsichord, while "I Can't Stay" is driven by steel drums.

The last three songs deliver a slow, soft landing to the album. While the listener might expect an up-tempo number in the album's final third, the effect is nice. "Neon Tiger," "The World We Live In" and "Goodnight, Travel Well" fit together for a satisfying, smooth finish.

In all, it's a varied album, but one that hangs together as a unit. In the age in which the album is allegedly dying, with the MP3 bringing back the single era, Day & Age nicely bridges the gap. Big fans will want to go out (or already have gone out) and buy the record, or at least download the whole thing.

At the same time, the high points make great singles as well. "Human" was released before the album and is already doing well. "Spaceman" will almost certainly follow suit.

Those preferring easy-to-comprehend lyrics may not be fans of Flowers' style of lyric writing, but it certainly keeps the listener thinking. The main question from the single's chorus is "Are we human or are we dancer?" which makes little sense outside of the singer's claim that it came from a Hunter S. Thompson quote about how America was raising a generation of dancers.

But what did the father of Gonzo mean by that? He's not around to ask any more.

But in the end, the band has produced another strong set. It is distinct from the first two studio albums, but it is still distinctly a Killers album.