Charlie Pickett and the little band that almost could 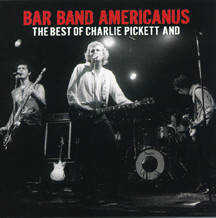 The history of rock and roll is littered with them -- those success stories that almost were. Artists that, because of personnel issues, the wrong timing or all-around bad luck, never quite live up to "what could have been."

Unfortunately for Charlie Pickett and the various lineups that served as his band (the Eggs and the MC3), they were just this sort of near-success story.

Mixing rock, country, blues and punk, Pickett and his band gave 1980s listeners lucky enough to have seen them or hear their records a unique mix of music delivered with great energy.

However, the music world wasn't quite ready. When Pickett decided to stop recording and touring in 1988, music was still about four years away from when bands like Uncle Tupelo, the Jayhawks and the Bottle Rockets would make it cool and (at least mildly) lucrative to mix country music with alternative rock sensibilities.

But for those of us unable to experience Pickett's band in the '80s, the good people at Bloodshot Records are giving us a chance. Released Oct. 7, Bar Band Americanus, The Best of Charlie Pickett and…, is a collection of the best tracks from Pickett's seven years of work.

Given that the band never had major-label support, the production value of the collection is uneven (although a number of tracks were produced by REM's Peter Buck). On the other hand, the attitude and energy is high throughout the album.

Whether in Pickett originals like "All Love, All Gone" or "Liked It a Lot" or other people's songs ("If This is Love, I Want My Money Back"), the band seems to have chosen hard-luck music that fit with their ultimate fate.

When Pickett sings about relationships, he doesn't deny the existence of love; he just seems to doubt it will work out for him.

But the album isn't a total downer. Tracks like "Marlboro Country," "Get Off Your Porch" and "Cowboy No. 77" display the positive energy Pickett could bring to a song, regardless of the subject.

The power of Pickett and the Eggs as a live act is put on display in the last four tracks, from a 1982 concert in Fort Lauderdale, Fla. "American Travelust" and "Shake Some Action" stand out from this set.

And even when singing about love, Pickett could occasionally find a positive note. "Penny Instead" is a song for every average guy who wonders what on Earth his lady sees in him.

In the end, the album leaves a listener wanting more, but it's more we can't have. Pickett gave up on music as a career in 1988 to go to law school. Now he's an attorney who sometimes plays gigs around Miami and Fort Lauderdale. (It's good not to always hear your typical rock and roll tragedy.)

For anyone who likes guitar-driven music without regards to genre, Pickett and his band are worth a listen. Bar Band Americanus is a testament to a band that did its own thing, even when it seemed no one was listening.

Bar Band Americanus, The Best of Charlie Pickett and…