Swingin' with Willie and the Wheel 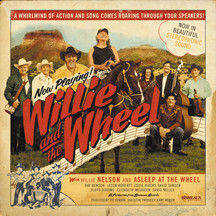 Willie Nelson has never been afraid to experiment.

While this could pass as a drug joke, it is also a valid statement about his music. No duet partner is off limits. No style is off limits.

But this penchant for experimentation has produced mixed results. Nelson's 1978 collection of standards Stardust was a great success and produced some of the most beloved tracks of his career. On the other hand, 2005's Countryman was an ill-advised foray into reggae.

Nelson's latest collaboration and genre experiment rings of much more of the success of the former. Willie and the Wheel, released Feb. 3 on Bismeaux Records, is a western swing collection with Asleep at the Wheel, the leading purveyors of the genre for the last 35 years.

That Nelson would release a western swing album should be no surprise. What is surprising is that the genre has not figured more prominently in his career. Growing up in Texas in the 1930s and 40s, Nelson was certainly influenced by Bob Wills and the Texas Playboys.

And as Nelson's late friend and collaborator Waylon Jennings said, in Texas "Bob Wills is still the king."

On this latest release, Nelson is a natural singing with Asleep at the Wheel's arrangements. As is his gift, these are not his songs, but he makes them his own.

In a dance-driven genre, Nelson's typically offbeat delivery could potentially cause trouble, but his voice is crisp and clear. He's right on the button when needed and lingers a half beat behind when it fits.

The surprise of the album comes from the band's playing. Present are the major elements we expect from western swing -- driving beats, whining steel guitar, saloon-style piano and amazing fiddle work. The twist comes from the horn section, whose arrangements make the songs feel as much like 1940s New Orleans as San Antonio.

The mixture works and drives home the truth of how much jazz has influenced all styles of American music.

The seventh track, a cover of the jazz and western swing classic "Right or Wrong" is the standout of the album. Besides being an outstanding version, it is the only song in the collection prominently featuring the vocals of the Wheel's lead singer Ray Benson. The Nelson/Benson duet gives the song a wonderful treatment.

And for the younger listeners to this collection, it brings to mind George Strait's cover of the song and the days when western swing was still present in his music.

The album is strong across the board, prompting listeners to tap their toes and sing along with the parts they know. For fans of Nelson, Asleep at the Wheel or simply traditional country and western, Willie and the Wheel is worth a spin.

Willie and the Wheel